Lucky Mr. Green was created especially for the popular casino to bolster its library of slots, filling the reels with symbols that remind us of the titular character. The game also comes with colossal symbols, stacked wilds and a Free Spins mode.

It seems this casino decided it wanted a special slot specially made for itself and contacted developer Red Tiger to make them one. In 2018, the game was released with a fair bit of attention, boasting a 5-reel, 3-row playing field filled with symbols that somehow related to Mr. Green. Comparing this slot to other games made by the same developer shows that it put quite some time and effort into building the game, creating special animations and a fitting soundtrack.

There are 20 win lines running from left to right, highlighting a win when it appears as well as showing the payline on the screen. This is especially convenient when there are multiple wins at the same time, which happened quite frequently. All the symbols looked good, even though there were card suits for the low-paying symbols. Still, these were also designed to at least look original. The high-paying symbols all fit the Mr. Green persona, with obviously a lot of green used to emphasise the links.

The music was mostly a rather generic but jazzy song that fit the style of the setting, placing us at a swinging club somewhere in the 20th century. Wins are celebrated with a short trumpet solo and we can occasionally hear an audience applaud.

The symbols in Lucky Mr. Green are well-drawn and original art, consisting of different items related to the character or casino. The symbols aren’t animated even when they’re part of a win, only moving the image slightly. With the use of both shape and colour, the symbols are easily distinguishable which helps the eye.

There are a large number of different symbols which make it harder to get a win, especially considering the low number of win lines. This causes the game to list itself with a High Volatility which I agree with. During my time playing, wins were spaced out but would usually pay out more than average to compensate for the time between wins. Players can pick a bet between £0.10 and £100 to mitigate the risk.

There are a number of features included in Lucky Mr. Green, with most of them appearing during the base game.

Most of the features are randomly triggered during the base game, requiring no special symbols or actions by the player to have them show up. This can be quite annoying since there is no way of telling when a feature will show up but it also adds to the excitement.

When Mr. Green shows his stopwatch, a multiplier is added to the next spin’s wins. The stopwatch shows different sized multipliers where the hours would normally be, and the hand spinning around until it stops at a particular multiplier. These range from 2x to 20x your bet. After this, the spins tops and any wins are multiplied by that multiplier. Since there is no guarantee there will be a win this can be a waste.

The times Mr. Green shows up and spins his umbrella, all low-paying card suit symbols are removed from the spin. This leaves only the high-paying symbols making it more likely the player gets a bigger win. In my experience, this feature was triggered the most but would often have disappointing results.

It’s possible for Mr. Green to conjure up colossal symbols that will fill the screen and make getting larger win lines a lot easier. Unfortunately, even after playing for more than an hour to write this review, I didn’t see this feature trigger once.

Getting 3 Showtime symbols on the screen starts this special bonus game. Mr. Green is shown standing in front of a path of multipliers that get bigger and bigger. The player chooses 1 of 4 hats, each hiding a certain number of steps Mr. Green will take. It also says ‘again’ or ‘collect’. When it says ‘again’, the player gets to pick another hat for Mr. Green to take more steps. When it says ‘collect’, the game stops and the multiplier Mr. Green is standing on is used on your coin bet. The maximum win during this mode is 800x your bet.

Finally, there is the Free Spins mode. This one triggers as usual, with 3 Free Spins symbols on the screen. The player picks 1 of 3 hats to determine the total number of free spins they get to play with before the mode starts. There is no way to re-trigger the free spins.

Lucky Mr. Green is an interesting slot with an overabundance of features. I thought they worked well together and added to the gameplay, but I can see how most casual players will be overwhelmed. There is little explanation to what each feature does unless you dive into the paytable.

The graphics and music are all great, fitting the setting as well as advocating the casino it’s based on. I especially liked how often Mr. Green himself would appear on the screen, as well as how he was fully animated. He would often dance or use his umbrella to activate different features, as well as playing the leading role in the bonus game.

Players that prefer toned-down or simple slots might not be so amused by Lucky Mr. Green, but players that enjoy modern games with lots of features will have a good time. The max. win of 800x your bet isn’t the best but since there are multiple ways to get this, it does seem more likely someone can win it than other slots with bigger jackpots.

Browse casinos with Lucky Mr. Green and other slots from Red Tiger. Create an account and try the game for free before making a deposit.

You can play Lucky Mr. Green in English, Finnish, Swedish, German and 16 other languages. 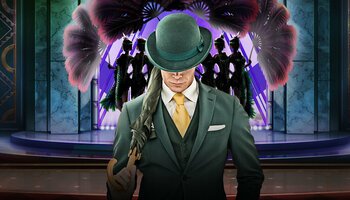