Lucky Valentine takes us to Paris, the city of love, and introduces us to Cupid as we go on a journey of romance. Surrounded by super romantic symbols and a multitude of features we’ll surely have a Lucky Valentine!

This slot was developed and released by Red Tiger in 2017 and it clearly shows off some of the best graphics I’ve seen come out of this studio so far. Everything looks great, with a huge amount of detail put into the background, the slot itself and the symbols. We find ourselves in Paris with the Eiffel Tower in the distance as we spin the 5-reel, 3-row playing field.

The 20 betlines can be triggered by a number of different symbols that relate to dating or relationships in some way. Unfortunately, it seemed the designers couldn’t come up with quite enough items because they filled them up with some basic high card symbols. They look alright but don’t really fit the theme.

When it comes to the music it has a sort of strange circus vibe that makes it feel like we’re at a fairground and not taking a walk in the most romantic city in the world. I would have expected some French style sounds but instead, it went another direction. It does sound good though and isn’t too obvious to be distracting.

Because there are quite a lot of different symbols it makes it harder to get a win without the special features. This results in a High Volatility which fit my experience. Whenever I didn’t get a feature to activate I would win very rarely.

To help get some wins Lucky Valentine comes with a set of special features. Some of these are activated randomly during the base game, others are triggered when you get the right symbols on the screen. First the regular features:

These features all act like you would expect them to. The Free Spins mode was pretty rare during my time playing. The player gets to pick a chocolate box that hides a number of free spins. I would usually get between 15 and 25 free spins.

The Bonus Game was a lot harder to get into and I only managed to activate it once. It transports us to the Eiffel Tower and we are given the opportunity to go up the tower. The higher we go, the bigger the multiplier that’s calculated with our current bet amount.

Speaking of which, players can pick a bet between £0.10 and £100 per spin. I found that, because of the high volatility, it was smart to start with a smaller sized bet and increase that if it felt appropriate. Starting with a high bet per spin was tricky as the game is rather sparse with wins.

The game also has a set of random features that activate during the base game or the free spins mode. These are not influenced by anything the player can do and just show up at random intervals:

In my time playing, I never saw two of the features trigger at the same time which might have been nice to see. Some of the features are good, others not so much. The Love Multiplier doesn’t increase the odds of winning at all so there’s a strong possibility the multiplier will go to waste.

All in all, I found the combination of random features and bonus games to work well enough together. They both filled in the gaps between wins and actually helped facilitate those. During the base game, when none of the features activated, I barely ever got any wins which made it feel like I was just passing time between features.

Lucky Valentine is easily one of the prettiest slots released by Red Tiger. It has a strong A-level vibe to it with subtle animations, gorgeous symbols and a lot of character in the form of Cupid. He flies around, shows his face and introduces the different features. I also think the theme is original and I haven’t seen it used very often.

The features are fun and interesting, creating an experience that is varied and exciting. Players that enjoy something simple and basic won’t find this here, although I didn’t find the features to be very difficult to understand. It just takes away from the base game quite a lot.

The max. win of 800x your bet seems low in comparison to other slots, especially considering the high volatility but it is feasible for anyone to win it if they get into the bonus game. My biggest complaint is probably how difficult it was to get into this bonus game, as I liked the idea a lot.

Browse casinos with Lucky Valentine and other slots from Red Tiger. Create an account and try the game for free before making a deposit.

You can play Lucky Valentine in English, Finnish, Swedish, German and 18 other languages. 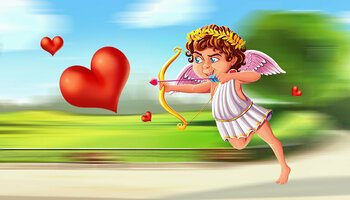