Magic Journey takes place in Asia and draws inspiration from one of China’s most famous tales, the story of the Monkey King. Even though this isn’t the most original setting, the game does feature slick graphics, re-spins and non-standard reels.

Players starting up the 2020 Pragmatic Play slot will probably begin by being a bit confused. There is namely only a 1-reel, 5-row playing field that spins, with a 3x3 field of 9 symbols above it. Magic Journey decided to change things up a bit by essentially turning the normal gameplay around. The idea with this slot is to spin the one reel and get enough symbols on the screen to get 1 of the 8 paylines to activate. When that happens, a re-spin is activated and additional symbols can be added.

This was honestly the first time I’ve seen this type of gameplay and it took me a few minutes to figure out exactly how it works, coupled with reading the info table. Even though it is a big departure from standard gameplay, it still essentially works the same. The game spins and when the right symbols appear on a payline, the player receives a coin win.

If you were expecting the same time of originality from the music, I’m afraid you’ll leave disappointed. It’s not to say that there was no effort put into it because the soundtrack sounds good and there are a number of different sound effects, but it didn’t score any points on innovation. You’ll hear a rather generic Oriental song playing in the background for most of your time playing.

Since Magic Journey works differently, the symbols don’t have an associated value. Instead, the player receives more coins depending on how many paylines are activated in a single spin. Using the re-spin mechanic it’s possible to activate up to 8 paylines at a time. This can happen in any order, resulting in the following payouts from lowest to highest:

The payouts are not cumulative, which means you won’t get a win on top of your other wins that spin. The number of paylines you finally unlock is the coin win you receive. This means the max. win is 400x your bet. This is obviously not very high compared to a lot of other slots, but it does feel a lot more plausible you’ll hit it.

Players can pick a bet between £0.20 and £100 per spin to change how much they will actually receive, but the game has High Volatility so I would recommend caution when you start playing this slot. The highest I ever got was a 5 paylines payout and that was only once, so the listed volatility was very close to how I experienced it.

Magic Journey is a game that departs traditional slot machine structure but luckily doesn’t add too many different features into the mix to make it even more complicated. All the features that are in the game work together to make it possible for the player to hit their jackpot.

Even though the slot looks different from what we’re used to, I found it to be pretty self-explanatory after I read through the rules. The game is a lot easier to understand compared to other slots as the only thing the player has to do is watch the symbols light up on the scorecard.

I think some players might not appreciate the lack of strategy and input, but other players might feel this is a more basic version of the slot mechanic. I think players should give this a chance regardless of their usual preference since it’s such a step away from what we’re used to. Who knows if you’ll like it?

Magic Journey looks at first glance like a standard Asian-inspired slot. When you take a closer look, it seems like a huge departure. Then, as you start to play it, it turns out it is remarkably similar to what we’re used to. I like it when a slot manages to do that to someone like me, with years of experience playing slots. Who knows who else might get a kick out of it?

There aren’t a lot of features here and the ones that are here are completely functional. Everything is aimed at getting players a series of paylines so that the wins get bigger. No bonus game or free spins here, just the quest for getting paylines.

People that only enjoy classic slot mechanics might enjoy this slot too, simply because it’s pretty close to the standard game. They might be turned away by the different presentation though, which does require some time getting used to. It’s up to everyone to see for themselves!

Browse casinos with Magic Journey™ and other slots from Pragmatic Play. Create an account and try the game for free before making a deposit.

You can play Magic Journey™ in English, Finnish, Swedish, German and 18 other languages. 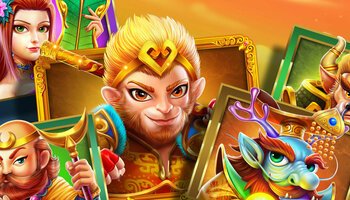