I came across Magic Stars 3 while filtering for three-reel slots and was curious to find out what the Wazdan studio was up to.

What I found was that there is an entire series of slots bearing the same title, where the number stands for the number of reels.

Even though my opinion of Magic Stars 3 is mixed, I still think it is the best game out of the entire series and you will soon find out why.

The title says it all; it is about stars in different shapes and colours, spinning on the reels against a deep and colourful space background. Both the music and the theme are relaxing but there is one gameplay feature that I feel is above the rest: the fast play option.

It became clear right away, that the payout system in Magic Stars 3 is as simple as that of classic one-armed bandits. Wins are achieved when you land three matching symbols on a payline and that is it.

Wins with the wild provide the most lucrative prize - a 40x your bet, which I don't think is such a poor payout. Besides the Wild, there are two sets of symbols, I'll call them the extra shiny stars and the plain stars. The first set pays 8x your bet, when three of the same colour land on a payline, while the second set pays 4x according to the same logic.

Because there aren't any bonuses, Wazdan has struck a smart balance between that and potential win outcomes. I don't think 4x is a poor amount. The smallest bet of 10p can get you £ 0.40 with a matching win of four low-paying symbols. The high-paying stars can earn you £ 0.80. Take a moment to take into consideration, how many slots can pay these amounts with three symbols!

The option to set the volatility isn’t at all a common functionality in the majority of slots games. I find this option quite welcoming, since it lets you set the course ahead - play for low payouts and fewer dead spins, or go for the opposite hoping to hit the 40x sooner rather than later. The game’s theoretical return to player is above average, at 96.50%

This is a slot that grows on you. I have to say a big bravo to Wazdan for striking such a careful balance between the absence of extra features and how the payouts are structured, plus the option to choose the volatility.

In my opinion the strongest feature of Magic Stars 3 is its three prizes: 40x, 8x and 4x. This makes it very straightforward, since you won't be getting payouts that don't match your stake.

I would recommend the game to anyone, because of the above and because I find the theme and the graphics rather superbly executed. The players who aren’t going to enjoy the game are those who like playing slots with lots of extra features, which this game has none.

Browse casinos with Magic Stars 3 and other slots from Wazdan. Create an account and try the game for free before making a deposit.

You can play Magic Stars 3 in English, German, French, Spanish and 6 other languages. 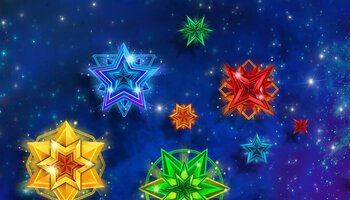