Magic Wilds brings a magical touch to the slots with a learned wizard enchanting the reels and bringing forth special features to create big wins.

If you’re looking for a slot that puts a mysterious spin on the reels, Magic Wilds might fill that need. Created by Red Rake Gaming and released in 2018. The slot puts us in a mansion that seems steeped in magic. With a 5-reel, 4-row playing field with 32 paylines the game doesn’t do anything too special yet but that might change soon!

As far as graphics go, Magic Wilds looks good. It has a lot of colours even though the setting is rather dark. The background shows us some arcane library inside a mansion and a large window with a symbol on it. Meanwhile, the reels are filled with different arcane symbols, all of these were original which I liked. Some of the symbols are stacked but not big enough to fill the entire reel.

Animations aren’t a huge part of the slot but they are there, usually when there is a payline with Wilds. At the same time, the higher-paying symbols did have some subtle animations which makes everything a little livelier.

The music is subtle which is something I’ve come to expect from Red Rake Gaming slots. It’s ominous and in the background, while the winning paylines play a light jingle. I thought that was kind of out of character for the setting but it works well enough. Entering the free spins mode starts a more present song but it stays relevant to the theme.

The game is completely filled with original symbols. They are all in some way related to the concept of the slot, with different types of runes for the low-paying symbols and different items for the high-paying symbols.

I really appreciated the work the developers put into these symbols. They’re distinct from each other, there are no card suits as symbols and the higher-paying symbols are all lightly animated. Getting a Stacked Wild also results in a special animation before it turns into separate Wilds.

As is probably evident the game has quite a large number of symbols. Usually, that results in a High Volatility but the slot’s listed Medium Volatility fit my experience. I think it’s because of the Stacked Wilds that there were still quite a lot of wins considering the many different symbols.

The features included in Magic Wilds are not too special but they fit the game well and they do change up the base game quite a lot. Players that enjoy a classic slot with some twists and turns will probably appreciate these features. I know I did!

The main feature for me was the free spins mode, where the playing field can increase in size from a 5-reel, 4-row playing field up to an impressive 5-reel, 8-row field. I really liked this part of the game when it triggered.

The Stacked Wilds can get duplicated if they appear fully on the reel which can result in two or more reels filled with Wilds. That rewarded me with some very big wins for me. Seeing the larger playing field grow as the free spins mode progressed was fun too.

Magic Wilds is not shy handing out Wilds, adding 1 or 2 almost every spin. Although this doesn’t always result in a win, I really liked the fact they showed up so often.

Magic Wilds is a relatively new slot that shows off Red Rake Gaming’s ability to create an original concept with a lot of special symbols and a fun free spins mode. The addition of stacked wilds really added some excitement to the game.

The graphics have deep colours that give off a great contrast with the darker background. Meanwhile, the animations give everything a more vibrant and lively feeling. They’re not over the top but they add some necessary movement to the game.

If you like games like this there is quite a selection of other slots you can choose from. Mythic Maiden was made by NetEnt and also takes place in a mysterious mansion. Meanwhile, The Dark Joker Rizes by Yggdrasil takes a little more comical look at the setting.

I was pleasantly surprised by Magic Wilds when it first came out as it was one of my first experiences with this developer. As I’ve played more of their games by now it still stands out. Where other games they made start to look outdated pretty quickly, Magic Wilds stays vibrant and beautiful to look at.

The different features aren’t too special but they offer a refreshing combination as well as the opportunity to win big. With the possibility to choose a bet between £0.10 and £50 per spin and a max. win of 994x your bet it also offers quite an incentive to reach that jackpot.

Browse casinos with Magic Wilds and other slots from RedRake Gaming. Create an account and try the game for free before making a deposit.

You can play Magic Wilds in English, Finnish, Swedish, German and 19 other languages. 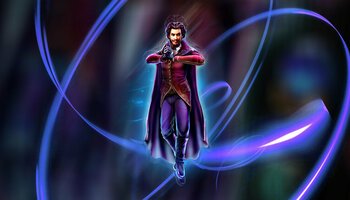