What happens when you strip down everything unnecessary from a slot? You get the exciting and wild Master Joker slot.

Pragmatic Play wanted to see how much you can take away from a slot and still keep it good. The result of this experiment was Master Joker, released in the spring of 2020. This slot is something else.

The game is condensed to the bare minimum. It only has one row of symbols and one special feature. Surprisingly, this is all that it takes to create an interesting game. Well, one reason for that is that the game has extremely high volatility and a high potential for big wins.

When I first saw the game, it was a bit of a shock. I wasn’t sure if what I saw was actually the complete game. I have seen a lot over the years, but an online slot with a single row is still such a strange idea. This is something worth checking out. There just aren’t many games like this.

Master Joker is a bit of an extravagant slot but it doesn’t go overboard with it. The gold on purple look works well, as the game is fairly simple in structure. It has that Vegas flair of days gone by; the feeling of luxury without being excessive.

Visually the game is very clean. It is easy to tell what is happening and what everything does. Pragmatic has a clean user-interface in their slots, so that won’t be an issue.

The only thing that I don’t like about it is the bet size selection. Increasing the bet jumps wildly between the coin value and the bet multiplier. This could have been done better by just having more coin values.

The music is energetic and changes depending on what you do. When the reels start to spin, new instruments are added to the mix. At first, I needed to stop playing to see if it actually was me who was causing the song to change. It was just that seamless.

The game doesn’t really have a proper theme, but I don’t think it needs one. It works perfectly with just the classical jester and slot symbols.

The game features a fairly standard set of classical symbols. They work well in this case, because you need to be able to quickly tell what symbols you have. This is a fast game, so the symbols must stand out.

Master Joker has eight regular symbols, which include things like lemons, cherries, gold bars and sevens, and one special symbol. The special symbol is the Joker herself, which only appears on reel 3. The joker is a wild and will activate the only special feature this game has.

Multiplier Wheel Feature does exactly what the name suggests. It gives you a multiplier only if your winning combination had the joker symbol in it. The multiplier wheel is worth a lot, as it can turn your small win into a massive hit.

Speaking of wins. The game doesn’t actually have any paylines, even though there is only one row of symbols. Every symbol is a scatter and you just need three of the same symbol anywhere to win.

The wins in Master Joker will fluctuate a lot. You will end up playing a lot of empty rounds just to hit a couple of massive hits in a row. I wouldn’t play this slot with a small bankroll, as it might just take a while to actually get the game going. There are no tiny wins that are less than your bet here and the volatility is extremely high. That combination should tell you a lot.

Just to speed things up, the slot has a Turbo Play. This way you can play really fast, which works surprisingly well here. Just hold the space bar and you’ll be playing at the speed of two rounds per second.

The only special feature in this game is right there on the screen waiting. The wheel of fortune above the reels is ready to multiply your wins. To activate it, you need to get a winning combination with a joker in it. Joker wilds appear only on reel 3.

Master Joker is something completely different. I have to give credit to Pragmatic Play for actually trying different things and pulling a game like this off. It’s surprising how well a game with everything unnecessary taken away works.

The game did catch me off guard. When I first opened it up, it wasn’t anything like I was expecting and the thing that I liked about it was unusual for me. The best thing about this game is the extreme volatility. I never felt like I was fighting the game, but that the fluctuation was just part of the natural ebb and flow. Without it, the slot would have been bland and uninteresting.

I do feel like I need to justify my score a little bit. I gave the game high praise for its features, even though there is only a single simple feature. I feel like that is the absolute perfect number of features and that the feature couldn’t be a complicated one. This is a fast and simple game, so the features needed to be fast and simple. It’s just a perfect fit.

Master Joker is definitely worth a look.

Browse casinos with Master Joker™ and other slots from Pragmatic Play. Create an account and try the game for free before making a deposit.

You can play Master Joker™ in English, Finnish, Swedish, German and 19 other languages. 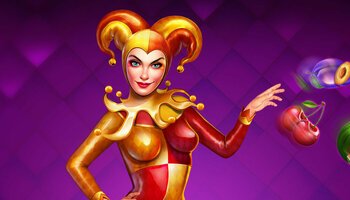