Japanese culture makes celebrating the coming of summer an appetising affair. Street food, paper lanterns and ladies dressed in silky traditional kimonos is something I could get an eyeful of and maybe even participate in a sumo wrestling tournament, for the sake of cultural immersion and potential 75,000-coin wins.

Play'n GO are the slots masters who've dipped their imagination in the culture of Japan to create a technically-solid game of high variance and 96.00% RTP. About a dozen spins in and it became apparent to me that I can’t expect much from the symbol payouts in the base game, yet the potential for winning felt quite satisfactory.

I gave the Matsuri slot a try because it reminds me of the unique cultural tradition of Japan. The setting is a small town whose outline has been set alight by a flock of gentle paper lanterns. The symbols on the reels are just as enticing to feeling the spirit of the summer Matsuri holiday, but the extra features are quite up that alley too.

The game held my attention thanks to one particular feature - the free spins bonus, which is quite a ride itself, but there is also a Kingyo Sukui goldfish-scooping game and its ability to yield a cash prize of up to 500x your bet.

The theme is all about celebrating this important day in the lives of the Japanese and the graphic design responds to tasks of grasping the holiday's essence. If street food has always been the main attraction of massive events, then the designers at Play'n GO have given it enough representation to make you go hungry.

I don't know what those fried balls on a stick are, but they do look delicious. That delicacy must be big for the Matsuri holiday because there are two symbols on the paytable that contain the same type of finger food.

The slushie looks just as appetizing and the comely Japanese ladies approachable for a chit-chat about the origin of their kimonos. You can weave a nice story between the symbols and with the potential payouts because the ladies are the game's high-paying symbols.

It’s too bad that Matsuri is not a heavily-animated game. The only truly exciting motion is created by landing winning outcomes, which lights up a number of fireworks behind the symbols.

Despite this, the game was able to hold my attention and I think it can do the same for most players out there, especially those that find out how fluid the high variance is in view of the symbol payouts.

Play'n GO didn't go feature-heavy with this game so players aren't going to find win multipliers and the wild doesn't pull off any tricks in the base game. So how can this celebration become more exciting?

I was happy to get two additional bonus symbols, which added two extra spins to the tally.

Matsuri was made in 2017, back when Play'n GO didn't usually offer bets below the cost of the number of paylines. With 25 paylines that are always active, the lowest bet is one penny per line, to the effect of 25p per spin as the lowest bet. This is just enough to get familiar with the Matsuri celebration, and hopefully celebrate a sizable win or two.

Wins with a bet of £1.00 can lead to payouts of £10, £12 and £14 for five lady symbols that match. The wild symbol is the most valuable one on the paytable. If it lands in five positions the prize is a hefty 40x your bet,.

Symbols in the low-paying category start off really small with only 0.12x your bet for the fried balls on a stick and up to 0.28x for the floral decoration landing in three positions.

The slushie, platter of fried balls, the hand fan and the floral decoration pay between 0.40x and 0.80x for four of a kind, which means the bet starts to make gains for your balance with either of these symbols landing in five positions.

We have a paytable that doesn't look very promising, and I am not going to mince words here - it doesn't.

Even the high-paying symbols don't return your bet unless you get four of a kind. So what's the deal with that? Matsuri is a high variance game that keeps all of its payout power for the two bonus features.

The math model has the free spins bonus at a potential of 3000x for the top payout. This is a sizable prize that can be made possible with up to 20 free spins and a greater number of expanded wilds than the usual.

The reason why I think it's worth holding out for the free spins bonus is because the game seems to be generous with the wilds and that can make even the small symbols trigger decent payouts.

Browse casinos with Matsuri and other slots from Play'n GO. Create an account and try the game for free before making a deposit.

You can play Matsuri in English, Finnish, Swedish, German and 30 other languages. 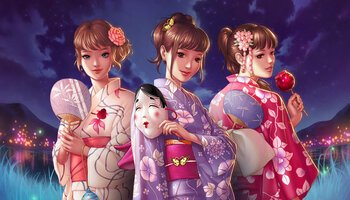