Maya drops us deep in the South-American jungles where we discover ancient Mayan temples and their associated treasures. I’m up for some exploring to find those treasures and keep them for myself.

Maya was developed and released by Red Rake Gaming in 2018. The slot features a 5-reel, 3-row playing field with 50 paylines. It boasts a completely unique set of symbols based on the setting, with no card suits or other disconnected symbols. Instead, everything tries to bring us into this ancient, unexplored world.

The symbols are all 3D and slightly animated when they’re part of a winning payline. When the free spins mode activates it gives a quick intro screen in-between before starting the spins. I found the graphics to look slightly outdated, the images lack some texture to pass as real. However, the fact that they’re all unique and modelled after actual Mayan artefacts make up for a lot.

When it comes to the soundtrack it stays pretty slight by only having drums when the rolls spin. Most of the sound effects conjure images of a dark jungle opening up to expose the Mayan temples. Only when the free spins mode was activated or a big win was scored did the music pick up.

All in all, the presentation of Maya was a real strong suit. I wasn’t a huge fan of the graphics but the fact they’re all original symbols and the whole design of the slot is working to set the mood scored a lot of points with me.

Maya has a series of symbols all based on the culture it’s inspired by. They are from highest to lowest:

The paylines all go from left to right and require consecutive symbols on the payline to appear for them to pay out. I found the payouts to be very low, even for a five-of-a-kind. Coupled with the game’s High Volatility it was difficult to get any wins. Fortunately, the free spins mode made up for it.

Maya has a nice selection of features that don’t mess with the standard slot playstyle too much while still offering a good variation. The features appear naturally while playing and although I found the free spins mode to be rather difficult to get in to, the other features appear a lot more often.

Most of these features I think are pretty standard. The Wilds appear often enough to help out but not so often that they make winning trivial. The game still has a High Volatility after all. The Free Spins mode was very rare for me to trigger even though it simply requires 3 Bonus Symbols on the screen at the same time.

Once I did get into the Free Spins mode, it could be quite rewarding. The Colossal Symbols that appear in the middle of the slot help make larger paylines and some have additional bonuses. The Colossal Bonus Symbol adds extra free spins, while a Colossal Gold Coin triggers Mayan’s Gold immediately.

Mayan’s Gold was the most original feature. During the base game, gold coin symbols appeared on the screen with numbers on them. Getting 6 or more of these symbols on the screen triggered the feature Mayan’s Gold. The Gold Coins became sticky and gave a number of re-spins that could add additional Gold Coins.

When the re-spins were done, the Gold Coins each paid out their value as a coin win, adding them all up together. Although they didn’t add up to as much as the free spins win I got, they did often exceed more than 30x my bet, which made them very good results.

The Mayan’s Gold feature is also the one where you can win 1 of the 3 jackpots. Getting the entire screen filled with Gold Coin symbols will award you the Grand Jackpot.

Maya is a slot that at first glance is rather simple. The graphics lag behind some of the other major developers but when I looked deeper into it I saw how much attention they put into it. All the symbols are unique, both the background and the reels themselves are built to fit the theme. The soundtrack is simple but fitting.

The features added to the sense of exploration and discovery, with the Mayan’s Gold feature being a unique but welcome deviation from the norm. The mode was fun and quick, triggered quite often and frequently became a big win. Still, considering the high volatility of the game I’d warn against betting too high.

The game lets you choose a bet between £0.50 and £35 per spin which is a bit smaller range than most other games let you choose. A max. win of 4,464x your bet would still result in quite a payout, however, so that’s nothing to scoff at.

If you’re either a fan of classic slots with a few modern features attached to it, or you get a kick out of exploring ancient ruins, Maya offers something for everyone. I really enjoyed my time with this game and hope Red Rake Gaming adds more of these type of slots to their repertoire!

Browse casinos with Maya and other slots from RedRake Gaming. Create an account and try the game for free before making a deposit.

You can play Maya in English, Finnish, Swedish, German and 19 other languages. 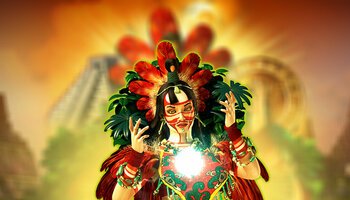