Hidden deep in the jungle lies many mysteries from the heyday of Mayan people - dare to explore? In Quickspin’s slot game Mayana we get to unravel the secrets of Mayans and maybe find the secret treasure, long forgotten behind the heavy stone tablets.

Mayana is basically a very simple game, but luckily it doesn’t fall short - it has interesting features where each winning symbol gets stuck and with every new winning combination comes a new re-spin. This mechanism does remind me of NetEnt’s slot game Reel Rush, as the first re-spins with sticky symbols expand the game area. So, if you liked Reel Rush, it might be worth to check out Mayana, too.

Despite its simplicity, Mayana introduces the player to some of the most popular features of modern days. As it’s easy to follow and it introduces some cool features, it’s a great choice for anyone who likes to play slots.

The reels of Mayana spin in the heart of the unknown jungle. Behind the game area lies a bright-green scenery of trees and bushes, and the symbols are nicely designed with a hint of the Mayan art style. Especially the highest-paying symbols look nice.

It’s nothing flashy or too elaborate, and there’s only about the bare minimum of animations. The music is mainly just drumming and flutes, which is a perfect fit for a jungle-themed game. However, the music doesn’t loop well enough so you can hear the point where the track starts over.

Mayana is an interesting slot that expands with three consecutive wins from 3 reels to a five-reel game. The winning symbols turn sticky and grant a new re-spin each time new winning symbols land on the reels. In the final form, the game has three rows, five reels and 243 paylines.

At first, the game has 27 paylines. After the second re-spin, the paylines will increase to 108 and after the third re-spin, there are 243 paylines. When there are no more new winning symbols, the game area resets back to a 3 x 3 grid.

Don’t worry if this sounds complicated. It all clears up fairly soon if you try playing the game.

Below you can see the payouts. Yes, they’re low, but keep in mind that because of the re-spins each winning combination gets paid at least twice. Also, the second win gets 2x multiplier. The third and the next wins after that get at least 3x multipliers.

Each time there’s a winning combination on the reels, a re-spin starts with the winning symbols turnings ticky. If the re-spin brings more of the same symbols as the winning ones (or creates an entirely new winning line), the new symbols get stuck as well and another re-spin is rewarded.

After the first re-spin, the outermost reels get revealed as the stone slabs are pulled aside. At first, only the bottom row expands from three to five. Then, it’s the middle row and finally, the top row. The re-spins continue until there are no more new winnings symbols.

During the re-spins, you get a 2x win multiplier for your second re-spin. The third re-spin gets 3x multiplier, and the rest of the re-spins after that are also multiplied by 3. When the reels have been expanded to their maximum and the 3x multiplier achieved, the last spin may trigger Mucha Mayana feature.

I like the way Mayana is done - simple, but yet entertaining. It’s a perfect example of how a modern-day slot can be fun to play, even without being filled to the brim with features and bonuses.

However, Mayana is a highly volatile game, meaning bigger risks to lose and harder to achieve good wins. Some days it indeed did feel like I couldn’t get more than three or four re-spins and it seems to be a very rare occasion to get all the spots filled with winning symbols.

I managed to trigger the Mucha Mayana feature a couple of times, but the maximum multiplier given to me was 7x. And, of course, with the lowest-paying symbols.

I probably wouldn’t ever play this slot exclusively, but rather every now and then if it happens to randomly show up in the game selection. Even then I would only play it with smaller bets because it’s the best strategy with high-volatile games - if you can call that a strategy. In any case, Mayana is a fun slot but does require being extra-cautious of your wallet.

Browse casinos with Mayana and other slots from Quickspin. Create an account and try the game for free before making a deposit.

You can play Mayana in English, Finnish, Swedish, German and 23 other languages. 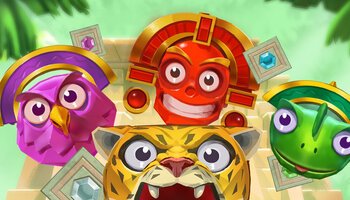 Very fun and easy to play.. enjoyed playing it