Help the Knight fight his way through the monster-infested maze in the gorgeous slot by Evoplay. Maze: Desire for Power was published in 2019 and it’s pretty clear that the idea for the slot was from NetEnt’s game Finn and the Swirly Spin. So, if the traditional slot games are getting dull I highly recommend trying out this fun adventure.

I had seen Evoplay around while playing other games, but I hadn’t really tried any of their games before Maze. So, I wasn’t in any way prepared for the beauty and the smoothness of it! In a way, Maze: Desire for Power looks and feels more like a regular mobile game than a slot. It’s very entertaining to watch the Knight swing his sword against the neverending waves of monsters.

The slot has abandoned the traditional reels and the game area is…. Well, a maze. The Knight follows the path as far as he can and beats the monsters and collects the gemstones on his way. If he manages to get to the end of the path the slot activates one of the three possible free spin features.

Maze: Desire for Power is truly a beautiful slot which has gone all-in with the adventure-like feel and the animations. The volatility level of this game is around medium and the maximum wins aren’t that high (unless you play with the max bet of £500), but it does offer a lot of fun for your money.

I can’t get over how nice this game looks. I love pretty much anything with a fantasy-theme so Maze: Desire for Power blew me away. The brave Knight keeps swinging his mighty sword and the monsters in his way don’t stand a chance. Even the monsters are designed beautifully and they could very well be actual characters from a proper game.

The music is mystical, dreamy and heavily influenced by fantasy games. The other sound effects are also high-quality stuff and go with the music nicely. I even kept the slot going in the background so that I could just listen to the music as I wrote this review!

Unlike in traditional slot games, Maze: Desire for Power doesn’t have any actual reels. The winning combinations can be calculated from anywhere on the game area, as long as it has at least three identical and adjacent symbols on a horizontal or a vertical row.

There are no traditional reels in Maze: Desire for Power. However, the symbols get dropped in the game from the top, as if there would be reels behind the maze.

Any winning combination gets removed and new symbols are added to the game. The Knight is the only symbol that stays no matter what.

When the Knight manages to walk all the way to the end of the maze, you’ll get 10 free spins.

The game has three possible features for the free spins: Yellow Cave, Purple Cave and Cyan Cave. They all have different Wilds and the cave is selected randomly.

Playing Maze: Desire for Power was a refreshing experience for me. However, as much as I enjoyed the slot I think it might be best suited for casual players. The game does have the potential for great winnings, but achieving those does require some heavy bets, too.

Like I said at the beginning of this review, Maze does resemble the slot Finn and the Swirly Spin from NetEnt. This includes the idea of having something travel through a labyrinth, but there's one more thing Maze has in common and that’s sadly the disappointment of the results. After so much happening on the screen, one would expect huge wins - but when the payout ends up being just 1-3 times your bet (or even less) I couldn’t help but feel let down.

I even triggered the free spins a few times, but none of these rewarded me with anything worth mentioning.

I might see Maze: Desire for Power maybe more like eye candy than a truly great slot game. Evoplay took the basic idea from Finn and made it its own, but that’s about it. In the end, I would say that Maze definitely deserves ten out of ten for the graphics and music, an average plus for the idea and an “okay” for the wins. Overall, a nice and enjoyable game.

Browse casinos with Maze: Desire for Power and other slots from Evoplay Entertainment. Create an account and try the game for free before making a deposit.

You can play Maze: Desire for Power in English, German, French, Spanish and 9 other languages. 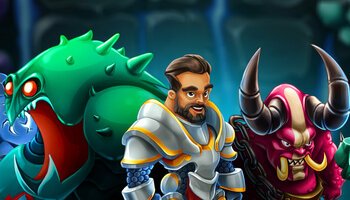