Mega Dragon fills the screen with rows and rows of symbols as they drop down to create winning blocks and maybe some big wins.

Created by Red Tiger Gaming, Mega Dragon was released in 2019 as a new non-standard slot. The game comes with a massive 8-reel, 7-row playing field. The game doesn’t use any paylines but instead looks for clusters of symbols to calculate a win.

The slot reminded me a lot of Tiger and Dragon by Red Rake Gaming due to its large playing field and similar theme but there are quite a lot of differences between the two. I should start by saying that I think Mega Dragon is a lot better than its counterpart!

As for its presentation, the game leaves some things to be desired. The graphics are clear and sharp but it’s also largely uninspiring. The setting of an Asian temple to frame the reels is a tired trope and the background of rock formations in the mist isn’t particularly original either. Nonetheless, it makes it very clear what the game is based on.

The game has a respectable soundtrack that is comparable to the graphics: it’s nothing very special but it’s well done nonetheless. There is a subtle Asian sounding melody playing in the background while wins get a short jingle.

Even though there aren’t that many different symbols, the large playing field and the cluster mechanic means that it has a High Volatility.

With such a large playing field the game almost has to have a collection of strange features, right? Luckily it’s not that bad and I found the game to be pretty easy to figure out.

As you can probably tell, a lot of the game’s features hinge around the Wilds that are added to the game. Wilds don’t appear naturally during your time playing as they don’t drop down from above. Instead, they are created semi-randomly whenever you get a win. I say semi-randomly because in my experience it would happen about 50% of the time, which means it was quite frequent.

Wilds act like regular symbols in that they drop down as wins are created. When they are part of a win they generally stay on the playing field which is how you get the Dragon Bonus! Getting 2 Wilds next to each other sounds harder than it is and it actually happened to me quite often. There is even a random wilds feature that would sometimes help facilitate another Dragon Bonus and so on.

There’s not much else I can say about these features. If you’re familiar with the cascading reels mechanic it functions exactly how you’d expect. Anything more than 5 of the same symbol together will result in a win, often creating a Wild. Get 2 Wilds together and 1 of 3 random dragons appears to grant another bonus.

The High Volatility does show in this style of game. Although I would get some smaller wins sometimes, the few times the game would create cluster after cluster, adding more and more Wilds to the playing field were the spins where I would get truly impressive wins.

Mega Dragon is a good but basic slot that’s intended for people that aren’t particularly big fans of the classic slot experience. There are no paylines here and the playing field is obviously a lot bigger. The cascading reels make it difficult to predict where and when you’ll get any big wins but when they show up they’re always a welcome surprise.

I found the graphics and sound to be acceptable but nothing worth specifically mentioning. The game has a number of extra features that we’ve come to expect from modern slots like quick spin and auto-spin.

If you’re a player that is looking for something different but not too different, Mega Dragon will be a perfect fit. The game moves away from the classic slot experience without introducing too many new elements. Experienced players will probably have seen it before, but it still offers a nice change!

With the ability to pick a bet between £0.10 and £200, players have some room to pick a bet they’re comfortable with. The max. win of 3,888x your bet was quite impressive but considering the high volatility probably a long shot to win.

Browse casinos with Mega dragon and other slots from Red Tiger. Create an account and try the game for free before making a deposit.

You can play Mega dragon in English, Finnish, Swedish, German and 18 other languages. 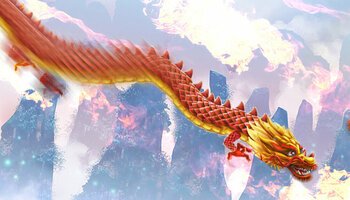