Sailing on a yacht that has a swimming pool, buckets of expensive Champagne, a private jet? Three words can describe this kind of lifestyle: Mega Glam Life.

The title is a perfect fit for the character of this Betsoft game, but there is more to it in addition to the glam lifestyle. The most exciting feature of Mega Glam Life is the Progressive Jackpot bonus which can trigger a five or six-figure payout.

Although the game looks and feels like it belongs to a past era, its payout potential is as current as ever. I’ve played the game on a few occasions because and not only because of the progressive jackpot bonus game. Mega Glam Life packs a feature related to the Wild symbol that is totally worth checking out.

The standard specs are rather common: three rows, five reels and 20 paylines, a theoretical return to player (RTP) of 96.29%, and a maximum win potential of 916,875x your bet which is quite the sum.

I can't ignore the fact that Betsoft has tried to bank on the success of another progressive jackpot game - NetEnt’s Mega Fortune. The title strikes a similar if not the same chord and the symbols are a near-replica of its setting. You’d ask yourself, why not go with the sleek, better-flowing NetEnt release? I think the answer is in the Wild symbol - not the graphics, not the progressive bonus game.

Mega Glam Life puts you in the role of a globetrotter who is basking in the warmth of obscene amounts of wealth. The graphics are what you’d expect from a game that was released in 2015 - it all looks and feels dated, but there are few bits that are entertaining, like the spunky animated cuts.

The Wilds, Scatters and Bonus symbols can raise the level of excitement because these are the elements that can lead to potential big wins. The overall experience could have been helped by a more concrete soundtrack, but all we get is a generic, lounge-jazz track that is the opposite of groovy.

Betsoft has instilled the gameplay with two extra features and a Wild symbol. The latter is commonplace in most online slots but in Mega Glam Life it does more than just substitute for the standard paying symbols.

The Wild can trigger the most valuable symbol payout if you get three, four or five on a payline. The more important detail is that it acts as a super-useful reel modifier. With three Wilds posting anywhere on the reels, Mega Glam Life triggers a respin while leaving the substitute symbols in place.

The scatter symbol is represented by palm trees on a sunset. You can win eight, 12 or 16 free spins by landing three, four or five scatters. If you stay in the game long enough to win the bonus, you'll enjoy the benefit of a default win multiplier of 3x your bet win.

It can get better, however. Additional scatter symbols landing during the bonus game will either increase the win multiplier by 1x or 2x or add 3 free spins to the tally.

The entire bonus feature can retrigger if you land three or more scatters and the maximum win multiplier is 10x your bet wins.

One of the special symbols of Mega Glam Life is the Bonus wheel. You need three of these symbols - one on reel two, three and four to start the game that can win you the progressive jackpot prize.

Needless to say, the chances of getting to the innermost circle of the wheel are extremely small. You get a single spin - if the wedge lands on a number, it is your bonus win in credits, but if it lands on an arrow, you progress to the next wheel.

You need to advance in the same manner over three circles on the wheel before getting to the Mega Jackpot.

Mega Glam Life's paytable structure pales in comparison to the features and the jackpot prizes. I mean, it has to, or it would be too good to be true.

Nevertheless, I still think the features can tip the balance over in your favour. In my experience, even the small payouts can grow sufficiently enough with the help of the Wild respins.

Another thing that I like is that you can play the game with 20p per spin. You can play with less but that would require turning down the number of paylines.

In terms of payouts, Mega Glam life has five low-paying and four high-paying symbols, plus the wild which is at the top of the pyramid.

The payouts are expressed in credits. Each figure is multiplied by the payline stake.

I can’t say that I loved playing Mega Glam Life but I definitely liked its extra features. The Wild respins and the Free Spins bonus with win multipliers are a springboard to potential big wins.

I had one amazing run in the Free Spins game, getting three Wilds that upped the win multipliers and added extra spins. On the other hand, you don’t get to play this bonus often at all. It’s a waiting game and the same is true for the Wild Respins feature.

I think that Mega Glam Life has a big win potential, but the base game RTP ought to be lower than the 96.26% figure. This includes the potential winnings from the extra features and the jackpot prizes, so be prepared to sustain some low wins in the base game. In order to secure longer gameplay, I’d turn down the number of paylines now and then and increase the bet when I saw it fit.

It’s a decent game overall, but the win potential will always depend on how many bonus features are triggered during your play.

Browse casinos with Mega Glam Life and other slots from Betsoft. Create an account and try the game for free before making a deposit.

You can play Mega Glam Life in English, Finnish, Swedish, German and 22 other languages. 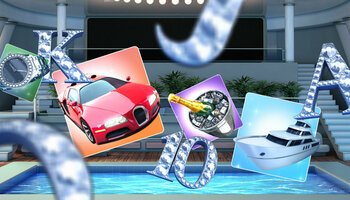