Mega Jade revolves around perhaps the most famous gem associated with Asia, the green jewel that was integral in many of its art and jewellery filling the reels to create big wins.

As the name suggests, this reel is about the Jade gemstone and maybe we’ll get to see the mega version with the 3x3 Colossal Symbol! This 5-reel, 3-row slot with 10 betlines was developed by Red Tiger and released in 2016. There isn’t much to give away the setting other than the Asian looking symbols and the fact that Jade is often associated with Chinese art and jewellery.

There is no background to speak of, the reels are framed by ornate gold and jade housing. The reels are filled with some custom symbols that are mostly different kinds of jade while the low-paying symbols are the usual card symbols. I thought it all looked acceptable but not doing anything particularly interesting. Without any context or background, it’s hard to associate this slot with anything.

The music is very soft and melodic in Mega Jade, not leaning too heavily into the Chinese roots but going for something a bit more original. I appreciated this. When there was a win I heard a bell and a short jingle that fit the music, so I never felt like it was taking me out of the game.

The game only has a limited selection of symbols and all of the high-paying symbols are som variation of jade. This means that green is a very prevalent colour in the slot. The designers did make sure that the symbols had different shapes which keeps them from looking too much alike.

The game has a listed Low Volatility due to the small number of symbols, which makes it more likely for there to be a winning betline. Nonetheless, it was quite rare to get a win in my experience. Because there aren’t really any special features to the game the max. win is 888x your bet, which you win with the highest-paying symbol on a five-of-a-kind winning betline.

Mega Jade doesn’t have a lot of features and they aren’t very complicated either. The features are:

The low number of features means the game is very simple and doesn’t result in many surprises or massive wins. The Colossal Symbol was very rare and when it did show up it would only partially stop on the reels.

The betlines from both sides helped in getting wins even though in my experience that was still pretty rare. The wins can count when they’re part of a winning betline or when the symbols are adjacent.

I wouldn’t recommend Mega Jade for the features. They are simple and part of the base game, meaning that they don’t stand out. Players that enjoy a simple play experience will definitely find it here. I thought it was rather boring but at the same time, I saw a good return on investment and my funds often went up so I can’t say they were bad features.

Mega Jade is a slot that won’t impress many people with its looks or features. The game is very basic in a lot of ways, staying close to the average. It looks fine and plays well but does little to set itself apart from the many other slots that come out every year.

Nonetheless, the gameplay is solid and I found the betlines from both sides to facilitate enough wins to keep things interesting. Even though I didn’t feel like it had the listed low volatility it did grant enough wins to keep my funds stable and often have them grow.

If I could give a tip, keep your funds in mind if you go for bigger bets since the game spins rather fast and you could have a dry streak in which there are barely any wins. Choosing a bet between £0.10 and £100 per spin, this could be a big or a small deal.

Browse casinos with Mega Jade and other slots from Red Tiger. Create an account and try the game for free before making a deposit.

You can play Mega Jade in English, Finnish, Swedish, German and 18 other languages. 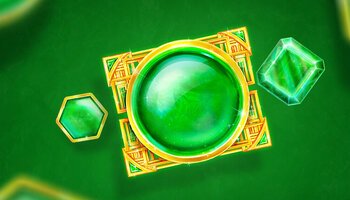