Mega Moolah Goddess is the latest release in a series of Mega Moolah progressive jackpot slots. This time, players find themselves in ancient Egypt where the titular goddess watches them as they enjoy wilds, free spins and 4 different jackpots.

The game is developed by Microgaming and came out in 2021, which makes it one of the latest additions to their growing library. As with most games by this studio, the slot doesn’t really stand out when it comes to its appearance. That’s not to say the game doesn’t look good because it does. The graphics are crisp and some of the symbols have subtle animations while the game plays. Most of the action takes place in the base game, with a 5-reel, 3-row playing field to play on.

There are a total of 25 paylines to get a win on. Whenever players get a win, the winning symbols are highlighted and the payline is shown, alongside the total coin win the player managed to get. When it comes to the theme, the Egyptian setting is extremely obvious and unfortunately, the designers didn’t go out of their way to inject it with some creativity.

In fact, the game is rather bland in its presentation. Even though things look colourful and open, the player is presented with a standard fare of symbols. You will get the expected Eye of Ra, some urns and the titular goddess who looks a lot like Cleopatra was depicted back in the day. All in all, it fails quite hard at setting itself apart in its appearance.

Mega Moolah Goddess borrows heavily from the Egyptian setting which already makes it quite obvious what most high-paying symbols will look like. To make it somewhat worse, the low-paying symbols are simple card letters that are in no way made to fit the theme. Instead, we are simply shown some basic letters and numbers. Where other Egyptian-based slots might have tried to integrate hieroglyphs or something, Microgaming took no extra steps whatsoever with this game.

The player will obviously be drawn by the progressive jackpot that the Mega Moolah series is famous for. Indeed, it’s why many players prefer this series since these jackpots can get very big. At the point of writing, the maximum win of this slot is a theoretical 19,429,692x your bet. When we consider players can pick a bet between £0.25 and £25 per spin, even the smallest jackpot would be life-changing.

Obviously, it won’t be easy to trigger the largest jackpot. There are 4 jackpots in total, with the smallest one only offering only around 3x your bet. Then there is the High Volatility, which makes even normal wins quite difficult to get a handle on. In the end, players will be about as likely to win the jackpot with this slot as they are with any other Mega Moolah games.

The symbols in the game, meanwhile, include:

Mega Moolah Goddess keeps things rather simple when it comes to its features, likely to make sure the focus stays on the jackpots. There are still some things that help keep the game interesting for people who don’t hit any of the jackpots, however.

Since these jackpots are progressive, that means any time a player spins for real money on this slot this increases the size of the jackpot. Even though the minimum amount is set, the jackpots can grow almost indefinitely before they are awarded.

Mega Moolah Goddess isn’t a slot that I can say a lot about when looking at it as a normal slot. The Egyptian theme is very unoriginal and it’s also done in a rather bland way. Nonetheless, the slot plays fine and the graphics are sharp and clear. The lack of originality might actually be quite comforting to some people.

As a jackpot slot, it’s a lot more interesting. It’s similar to the other games in the Mega Moolah series. It knows the players are there for the jackpot and doesn’t waste any time with unnecessary features. That said, even without a jackpot the player still has a shot at some decent wins. The high volatility means that the payouts for bigger wins are high.

If you’re looking for a game that makes it possible to win a truly massive jackpot but still keeps things entertaining when you don’t, this slot might be for you. There are not a lot of things to do or see here, but the prospect of a big win is obviously always enticing.

Browse casinos with Mega Moolah Goddess and other slots from Microgaming. Create an account and try the game for free before making a deposit.

You can play Mega Moolah Goddess in English, Finnish, Swedish, German and 26 other languages. 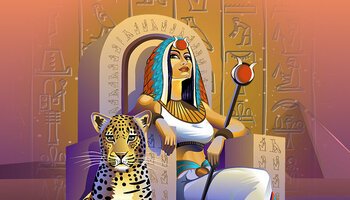