Mega Moolah is an iconic progressive jackpot slot that was released in 2006 by Microgaming. Instead of just one jackpot, it has four constantly growing prizes. It currently holds the world record for the largest jackpot payout in an online slot machine.

While it only has two special features, free spins and jackpots, Mega Moolah is probably one of the easiest modern slot games. There’s nothing much to it but just spin the wheels and wait to see if the randomly triggered Jackpot Bonus wheel activates.

By today’s’ standards, Mega Moolah is a quite boring slot that has survived the past years with only the charm of the progressive jackpots. But, on the other hand, it’s extremely easy to play even if one doesn’t happen to have much of an experience with online slots.

Mega Moolah sends you to an African safari where you can spot wild animals like lions, antelopes and elephants. The world of Mega Moolah is very comic-like and the design of the animals is also such. More or less all of them are staring you while making goofy faces or just snickering. The slot is quite colourful and pleasant to look at, though the game itself definitely feels old.

The music or the effects aren’t coming on too strong, which is nice. Birds are singing, lions are roaring in the distance and crickets are chirping. With the wins, you get to hear rhythmical drumming and some of the animals have their own sound effect when they activate. The most intensive music can be heard during the Mega Moolah Jackpot Bonus when the choir is chanting the slot’s name over and over again.

In my opinion, while Mega Moolah looks fun and all, it’s in many ways very out-dated. It would be interesting to see this game entirely revamped or have a sequel like NetEnt did by creating Mega Fortune Dreams.

Mega Moolah has five reels, three rows and 25 paylines going from left to right. Only the Scatters pay anywhere. The lions are also Wilds and can substitute any other symbol except for Scatters. Landing three or more Scatters award you with 15 free spins.

The Jackpot Bonus is triggered by random on any spin and with any bet level.

Landing more than three Scatters does not increase the number of free spins won but the Scatters do pay nicely themselves. During the free spins, the winnings are multiplied by three.

It’s possible to re-trigger the free spins by landing three new Scatters on the reels.

These jackpots are all progressive, meaning each of them keeps growing until won. After the jackpot has been claimed, it reverts to its seed value. These are:

So, if you happen to win the Minor Jackpot when it’s £500, it will go back to its original seed value of £100 and start growing again for the next winner.

The Jackpot Bonus is a wheel consisting of 20 sectors:

You get to spin the wheel once. As the wheel doesn’t have any blank sectors, you’re bound to win one of the available jackpots. Mini Jackpot being the most probable one, of course.

Today, Mega Moolah has no dice against modern online slots. It can’t compete with breathtaking graphics or versatile features, but it really doesn’t have to, either. It has the biggest ace in the sleeve with the progressive jackpots which is something only a few other slots have. Also, Mega Moolah has successfully made a name for itself with the humongous winnings.

For a seasoned player, Mega Moolah is nothing more than a way to try and win one of the jackpots on offer. With the poor RTP of 88.22% (not including the jackpots), it’s not a very good choice for casual players hoping to score a decent payout other than the jackpot. However, the free spins have the 3x multiplier and they can be re-triggered, which is something and better than nothing.

To put it simply, the pros and cons of Mega Moolah are:

So, it’s entirely up to you which of these weighs more on your scale. A slim chance of winning a jackpot and greater odds for you to lose your stakes? Or, better chances on winning more moderate (but still nice) prizes from regular slots.

In my entire history, I’ve played Mega Moolah quite several times. And I think I have had the pleasure of triggering the Jackpot Bonus three times - every time taking home the Mini Jackpot which was around £10-15. The silver line being, I can now technically call myself a triple jackpot winner.

In a nutshell, Mega Moolah is a kind of a relic from “ye olden days” from when Microgaming was one of the biggest casino software providers. The slot has changed very little from those times, for the most recent change being the update of the game controls. But, it’s an undeniable fact that it doesn’t need anything more to stay famous. The progressive jackpots keep luring the players as long as the game exists.

Browse casinos with Mega Moolah and other slots from Microgaming. Create an account and try the game for free before making a deposit.

You can play Mega Moolah in English, Finnish, Swedish, German and 25 other languages. 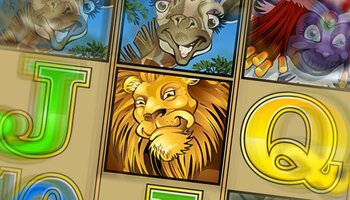