Mega Stellar is set in space where we’re surrounded by the rich deep purple of plasma clouds and the vastness of the galaxy as the reels spin, filled with mysterious gems.

This slot was created by RedRake Gaming and released in 2016. The game is set in deep space with a background image that shows us a starry sky as well as two planets. If that sounds familiar you might be thinking of Play ‘n GO’s Crystal Sun which had an almost identical background. That slot came out in 2019 however so if anything, they copied Mega Stellar.

I didn’t find the look of the slot to be very appealing. The background looks pretty but there is no movement and the rest of the game has not been made to fit the theme at all. The symbols are mostly gems, with a few other disconnected symbols to fill the 5-reel, 3-row playing field. I don’t think it should have been too hard to come up with space-related symbols but alas.

The sound-design is more fitting to the setting with a very otherworldly sounding electrical soundtrack that begins in the background but pumps itself up when a Sticky Wild is added and the re-spins begin. When there’s a win on 1 of the 10 paylines the music also gives us a short jingle to emphasise it.

The symbols in Mega Stellar are made in 3D and look alright although a little dated. Most of them are different coloured gems, with a very misplaced 7 and $ symbol thrown in for good measure. They aren’t animated except for a quick low-poly swirl when they’re part of a win.

I found the symbols to be pretty boring and disconnected from the theme but they are varied enough to easily tell apart. The fact that there are paylines that pay both ways means it’s nice to see a win accentuated with a quick animation. The max. win is only a paltry 178x your bet which is extremely low, especially considering the Medium Volatility.

Mega Stellar is not a feature-heavy game with only a handful to mention. I found them to have a relatively big impact on the gameplay, however, and especially classic players will enjoy them.

The wilds don’t appear very often because of their special features, where every Wild that appears will expand to fit the reel. It’s possible for up to 3 to appear at the same time but that was even rarer. When it does happen you’ll get a few re-spins with all 3 reels filled with wilds, which was always a big win.

It was a nice feature but I’m afraid it doesn’t show up enough to really make an impact on the gameplay. I would say about 1 in 10 spins will have a Wild in it, and it was extremely rare for another Wild to show up during the re-spin.

Because of the pays-both-ways feature, the number of paylines is essentially doubled which helped with getting a win somewhat. Add to that the fact there are only a limited number of symbols and that gets us to the medium volatility.

All in all, I thought the gameplay of Mega Stellar was basic but alright. Players that enjoy a rudimentary slot experience with only a few features that have a limited effect on the gameplay, will get what they are looking for in this slot.

Mega Stellar is a slot that already looks pretty outdated even though it’s not that old. The graphics are visually okay but look rather bland and there aren’t many animations to make it come alive. The lack of a coherent theme with the use of symbols hurts the immersion.

The gameplay is fine for people that enjoy a classic slot with features that do little to disrupt the gameplay. If you are someone that likes to play a modern slot with surprising twists to the formula or special bonus games won’t find those here.

If you’re not bothered by the looks of a slot and prefer games that are rather simple you might like Mega Stellar. Players that are looking for more than the bare minimum will probably do better looking on. The fact it has such a small maximum win also doesn’t speak in its favour.

Browse casinos with Mega Stellar and other slots from RedRake Gaming. Create an account and try the game for free before making a deposit.

You can play Mega Stellar in English, Finnish, Swedish, German and 19 other languages. 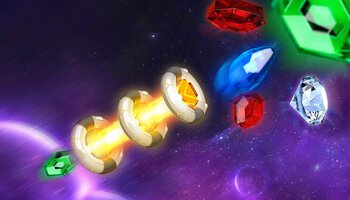