Mercy of the Gods slot review

Play Mercy of the Gods

You don't have to feel small against the towering monuments of Egyptian pharaohs, because Mercy of the Gods can let you get away with a good chunk of their look.

This is a three-tier jackpot that is keen on weighing your wagers against the game's mathematical feathers. There is a possibility that you may fill up a reel set with the coin symbol and make it out with the Mega pot, or go halfway for the Major.

But regardless of whether you get to the jackpot bonus or not, Mercy of the Gods can offer the best of NetEnt's slots-making craft. Players can discover the inside of a lofty chamber, made of gold, of course, and a reel ser of three rows and five reels.

If the graphics are not enough then there are the moving parts and the energy that flows through Mercy of the Gods, as it is all harnessed towards the possibility of triggering big wins in the base game that can be aided by a wild symbol, respins, double wilds and few other features.

To me this is one of those rare adventure-inspiring games that can make you an insider of the Egyptian court. So instead of wandering off while on a guided tour of Giza I may as well step into the shoes of the proven NetEnt adventuress and play a high variance game that has RTP of 96.64%.

Ancient Egypt is a vast field so to say that this game is about this ancient civilization would be like throwing a dart into a cirrus cloud. The designers at NetEnt make the entire experience way more intricate by inserting ravaging graphics and symbols.

The background behind the reel set hints at a massive temple that keeps a mysterious gold plate inscribed with hieroglyphs. Is deciphering these the key to immortality, or does incantating the verses cause the doors to heavens to open wide?

Mercy of the Gods definitely teaks you places, as triggering the 'Hold and Win' jackpot game takes place underground, inside the crypt of Anubis. Along the way, players are greeted by a glowing apparition of that deity and lots of animated bits that surround the winning outcomes and other events on the reels.

One of the most striking highlights that I loved start to finish was the musical theme. This is a no-nonsense production of sound that sends magical notes in the aether and makes the gaming experience even more of a thrill than it already is.

But regardless of all of the above, without a fascinating set of extra features Mercy of the Gods would be a shell of a game. Thankfully, it isn't and we are about to see what exciting twists and turns can be arranged the random number generator.

I'd say 9.9 out of 10 contemporary slots have a wild or a scatter wild. It's almost a given. This game, on the other hand, has a wild that can grant respins that may turn a single spin into a succession of winning outcomes.

Mercy of the Gods is known for its Grand jackpot prize, which is a live amount that seeds at £10,000. To get to it, you have to see the reel set getting filled with the jackpot symbol, which is a golden medallion embossed with hieroglyphs and an anatomical rendition of the human heart.

The jackpot bonus is triggered when three or more of these symbols are collected during the course of the gameplay. The bonus game itself is a 'Hold and Win' affair that starts with three spins and resets that number back to three every time a heart symbol lands on the reels.

Mercy of the Gods is not an expensive slot to play. The reel set spins across 20 paylines and coin values range between one and 50p per line, so the smallest bet is £0.20.

For a feature-filled game, I find the paytable to be as welcoming for the possible big win as in some of the multiplier-heavy games out there. The main reason for this is the high-paying symbols which can pay between 35x and 80x your bet for five of a kind.

Admittedly, NetEnt has games with symbol values that are significantly more robust than this. Two examples are the 130x your bet for the top symbol of Piggy Riches or the 150x your bet golden scarab wild symbol in Coins of Egypt.

However, Mercy of the Gods game has both free spins and respins and is a jackpot game at the same time, so it's easy to deduce assumptions about the existing big win possibilities.

So here is the final breakdown of Mercy of the Gods. The graphics are stunning and the gameplay is very entertaining, especially knowing that you can win one of three jackpot prizes or a big win with the help of the respins.

At the same time, this is a high variance slot, so it may take a while for its potential to come to fruition. The royal card symbols pay between 0.3x and 3.5x your bet, which is a balancing act that helps sustain your balance in view of a big event on the reels.

Nevertheless, I can recommend the game to any player out there. I don't think 20p per spin is an exorbitant amount just to try a game whose grand jackpot can reach a robust five-figure sum.

Play Mercy of the Gods for free

Browse casinos with Mercy of the Gods and other slots from NetEnt. Create an account and try the game for free before making a deposit.

You can play Mercy of the Gods in English, Finnish, Swedish, German and 20 other languages. 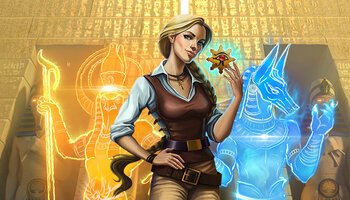