Merlin and the Ice Queen Morgana takes its inspiration from the classic tale of King Arthur and his Knights of the Round Table. Although most of them aren’t present in the slot, Merlin still has to face off against Morgana with multipliers, free spins and stacked wilds.

The game clearly takes a lot of inspiration from the classic story and makes it its own thing. The developers of Play ‘n GO clearly had a lot of fun making this slot that was released in 2021. I was immediately impressed by the look and presentation of the game. Everythings look crisp and clear. Although some of the symbols are a bit uninspired, there are plenty of animations and original art to distract us from that.

Players will play the game on a standard 5-reel, 3-row playing field with only 10 paylines. This might seem somewhat low but there are features that augment this slightly. The playing field is framed by a series of locations in the background. Some of these include more animations than others. Nonetheless, all of them bring the frigid surroundings of the ice queen to life.

There are really only 2 characters in the game. Both Merlin and Morgana come with their own series of animations. While Merlin appears as a single tile symbol, Morgana can also appear as a Stacked Wild. This gives her character some extra room to be shown off, and the included animations really jump off the screen.

Merlin and the Ice Queen Morgana has the usual division of symbols. The high-paying symbols are what we would expect, original art designed specifically for this slot. They include certain items that either the wizard or the ice queen might use. Meanwhile, the low-paying symbols are simple card letters. They are designed to fit the narrative, which I do appreciate.

Players will have to face High Volatility when playing this game. This means wins will be few and far between, but when they do hit they are likely to be quite big. This is coupled with an RTP of 96.2% which is a bit above average. I would consider this game to be quite fair in its opportunities to score a win. The features do help with this.

There are some ways for a player to change the game. The main way is to alter their bet to a number between £0.01 and £100 per spin. There aren’t a lot of slots that allow players to bet as little as this, but it is a good way for players to keep going for a longer time. Besides that, the game offers everyone a shot at the maximum win of 20,000x your bet. I would consider this one of the biggest regular jackpots I’ve seen so far.

The game includes the following symbols:

Merlin and the Ice Queen Morgana doesn’t forget to include some features in the gameplay. I didn’t think these features were exceptionally original. That doesn’t mean they don’t help players in getting bigger wins. I also liked that they were included.

You’ll find the following features in this game:

Players that are looking for a rather classic slot but with some modern features will likely enjoy this game. The features are rather familiar to most people but do offer some changes to the standard formula. This results in every spin holding the potential for bigger wins. Especially the Morgana Stacked Wild can alter a regular win into something much more interesting.

The free spins mode is quite hard to activate but it wasn’t exceptionally rare either. This game mode adds some extra benefits including the expanding symbol. If the game selects a high-paying symbol this can result in some truly impressive wins. There is also the added benefit of the Stacked Wild appearing more frequently.

Merlin and the Ice Queen Morgana is the type of slot that we can expect a lot of. They provide an excellent mix of standard gameplay, modern features and exceptional graphics. This will likely make them attractive to most types of players. The added attention to detail in the graphics and presentation also help a lot.

I was pleased by the different features even though I’ve seen them before. They mix well and all have their own impact on the game. The fact they also can interact with each other means that there are unexpected synergies occasionally. This can result in a big win when you would think it’d just be a small one at first glance.

Players that are looking for the biggest jackpots also can’t miss this game. Although there are bigger wins to be found when playing the progressive jackpot games, a massive 20,000x win on a regular slot is quite rare. This could be an enticing prospect for any type of player.

Play Merlin and the Ice Queen Morgana for free

Browse casinos with Merlin and the Ice Queen Morgana and other slots from Play'n GO. Create an account and try the game for free before making a deposit.

You can play Merlin and the Ice Queen Morgana in English, Finnish, Swedish, German and 30 other languages. 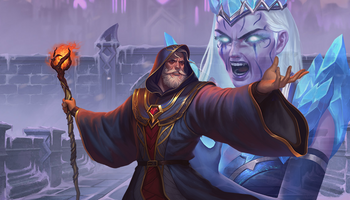