Three heroic Micro Knights have attacked a grid-based castle that holds a max win potential of 2,500x your bet.

The game is one of the most original productions by ELK Studios.

In Micro Knights, the system of cluster payouts is enriched with additional springs and levers that can trigger multiple reel modifiers.

If you've spotted the purple dragon that wraps around the castle's turrets, it's part of the game too.

The comical nature of the premise makes Micro Knights even more engaging. Basically, any spin can result in a Micro Knight working out his anger by slamming the grid.

The queue at the bottom of the screen sends animals and produce to feed the dragon - which can bring a major benefit for the player.

I've had the game on my radar for some time and the anticipation paid off in time well spent.

In terms of payouts, the game can shake out winning combinations that are fairly good, but with the help of the reel modifiers.

Big wins are definitely possible in the free drops bonus feature but in my experience, getting there requires more spins than I would have hoped for.

The reel set consists of seven horizontal and seven vertical rows, which makes the symbols appear tiny. Personally, I didn't really notice the symbols because of this, but it doesn’t even matter because Micro Knights is quite a lively game.

The three knights can deliver their signature move to the grid - thereby triggering one of the modifiers. Each knight springs into life when he becomes engaged in his specific task.

Micro Knights plays a lot better on mobile or tablet than PC. If you are playing on a PC, the grid will occupy a small portion of the screen while all the remaining space is given to the background. Playing on mobile brings the game closer to you because the grid covers the entire screen.

Micro Knights has a cluster wins system where each winning outcome triggers a cascade. This is the mechanic that can trigger the reel modifiers.

The meter on the right fills up with each win, depending on the value of the symbol clusters. Nevertheless, it does fill up pretty frequently and you get to reap the benefits of the modifiers.

They are the following:

Removes all low-paying symbols from the grid and invites a new drop of symbols.

Adds between 3 and 15 Wilds in random positions.

A colossal symbol drops on a random location on the grid.

This part of the game is related to the symbol clusters and two reel modifiers.

Every symbol that lands on the queue add counters to the matching symbol kind on the grid. If there is a winning cluster, the symbols on the queue help in boosting the prize.

There are two random events that can influence this part of the game.

The red knight delivers the Charging Knight modifier - one random row is pushed out of the grid and on to the queue.

The blue knight triggers the random Smashing Knight modifier which adds a value of one to the symbols on the queue.

There are three other modifiers that can influence the queue when the meter fills up.

Adds between 2 and 5 rows into the queue.

Moves all visible symbols into the queue.

This modifier is one that crowns the player's patience. Basically, it takes all of the symbols on the queue to form winning clusters.

Three Bonus symbols (crown) trigger five free drops (spins) that come with a set of augmentations that can make all the difference for the potential prize.

First off, all of the modifiers can trigger during the bonus. You also get the benefit of the cascades, plus a queue and a meter that doesn't reset.

If you win the bonus game, you get a five-spin stretch to get the meter filled. If the game achieves this for you, you'll likely get one or more reel modifiers plus a queue with counters to add heft to the symbols on the grid.

This is where Micro Knights keeps its big-win potential. The base game can be just as awesome, but these five spins give you the chance of getting multiple modifiers.

Here is where I see the biggest difference between Micro Knights and other grid-based slot games. One universal truism about this category of games is that the paytable starts off really small.

Clusters of five symbols can pay between 0.10x and 0.25x your bet for the low-paying symbols. Moving up the ladder, you'll need at least nine matching symbols to win more than 1x your bet.

Big wins consist of clusters of 12 or more symbols. These are rare, but not altogether impossible.

This leaves us with the reel modifiers. There is enough happening on the reel set in terms of extra features, which makes Micro Knights one of the go-to grid-based games.

It is the modifiers that can give any sequence of cascades a real chance to turn into a big win.

Because there are too many rows on the ladder of winning outcomes, I'll summarize the symbol values in the following way:

In my opinion, Micro Knights was one of the best games of 2020. Thanks to the reasonably balanced volatility level (medium), a greater number of players could enjoy getting a taste of winning outcomes of 100x bet or more.

I think that the game is here to stay. The gameplay is unique, the theme is kind of bonkers and there is a lot happening on the grid. Players can play with at least 20p per spin - a reasonable sum to give it a try.

Browse casinos with Micro Knights and other slots from Elk. Create an account and try the game for free before making a deposit.

You can play Micro Knights in English, Finnish, Swedish, German and 18 other languages. 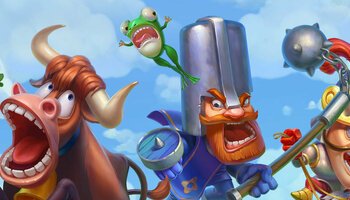