All that glitters is not gold but in Midas Coins, the golden touch can turn coins into a fortune. This slot is based on the well known Midas myth who asked the gods for everything he touches to turn to gold. This ability soon backfires when he touches his daughter and she too turns to gold. The game has the 3 main characters depicted: Midas, Marigold and the Satyr.

With the palace as a background, the slot has some beautifully designed elements. The soundtrack too is perfectly suited to the game and the FX are well coordinated to bring out that extra bit of excitement.

High-paying symbols are made out of colourful tiles depicting different types of jewellery. Low-paying symbols take the form of greyed out card suits. There is such a stark difference between the two it almost jars. When playing your eyes are immediately drawn to the golden artefacts and your mind just ignores everything else, even the coin symbols that bring vast riches when Midas appears on reel 5.

Landing 3 Satyr Scatters on the reels will award 12 free spins and pay 2x the bet. In All is Golden coins will land in reel 1 to 4 and will be collected in the Coin Stack (that always starts at 3x the bet). If Midas lands on reel 5 the value of the Coin Stack is awarded. Even when it is awarded the stack doesn’t empty so as you continue spinning the reels more coins will be added.

Midas Coins is a pretty straightforward slot with simple mechanics. It follows Midas’ myth and it does feel slightly ironic that the curse that humbles Midas is used as the central premise of the slot.

Even though it is meant to have medium volatility I found my funds vanishing quite quickly and the wins I was getting were on the mediocre side. There might be 20 paylines and only 10 symbols in play but the coin symbols are so random and do disrupt a lot of the paylines so wins don’t come as frequently as you would expect. It’s also a waste to have loads of coins appear only for Midas not to show up. This caused me quite a bit of frustration!

The highest wins with Midas on the base game only reached 35x (when a 25x and a 10x coin appeared). Most of the other Midas appearances left me with wins around the 10x. In the bonus round, you can see the potential for the 5,000x max win but a lot of things need to happen for this to be achieved. I didn’t even manage a 3 figure win and the most I took away during the bonus was 47x.

This is a good game for slot beginners who want to sample some high variance. It has stunning graphics and a gorgeous soundtrack so it will make for a relaxing game.

Browse casinos with Midas Coins and other slots from Quickspin. Create an account and try the game for free before making a deposit.

You can play Midas Coins in English, Finnish, Swedish, German and 24 other languages. 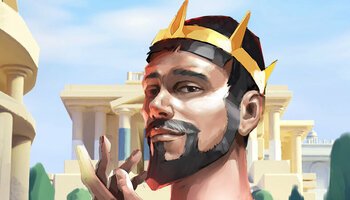