Midas, the legendary king of the ancient Phrygians, was known for having turned everything into gold. His people were not known for their trading skills, because they could have sold all that gold and made a fortune, but they go down in history for having invented the world-famous Smurf hat. I'd take a game that involves turning your furniture into gold any day and this is what the Red Tiger release is all about.

Midas Gold comes with a standard 3x5 reel set and 243 ways to win. The only thing I like about the layout in the case of this game is the big symbols and the animation involving King Midas when there is a winning outcome.

The base game doesn't offer anything that we haven't seen before and there is only one extra feature that doesn't trigger frequently enough to send the king on his gold-touching frenzy.

Nevertheless, Red Tiger has furnished the game with a maximum payout potential of 1,800x your bet, so real big wins are possible but can crop up only during the respin feature. In my experience with the game, it pays to wait for king Midas to make his selection of the available symbols, as long as he avoids the royal cards.

Red Tiger Gaming puts you in a lush garden that is part of Midas' palace. The place does feel like someone has splurged it with his golden touch.

Those who know the legend of King Midas may remember the moral of the story, which is there for all to see in the form of golden bowls filled with golden fruits that our golden king can't really enjoy.

That much is clear from the graphic design. We know where we are and the rest is a collection of alright-looking high-paying symbols.

My highlight is the extra feature. King Midas steps to the fore to perform his magic touch in a way that gives the player a lift of spirits, which you don't get from the base game, I don't think.

This is one of the Red Tiger games that lack a wild symbol, so the base game feature is either heavy on the respins or transforms symbols.

One example is the Masquerade slot which I'd pick many times over Midas Gold but let's not dismiss the game at hand so quickly.

I like this extra feature but sadly, it is the only one in Midas Gold. This would be fine if Midas didn't take an awful lot of time to appear on the reel set. That's at least my impression and considering the small payouts for the card symbols I think it is justified.

The game comes with nine paying symbols plus that of King Midas, so there isn't really a clutter that can cause some symbols to be seen every odd-number of spins.

In this game, I've had a payout for any of the symbols on the paytable, including that of the princess which can bring a decent 8x your bet for five of a kind and this can happen with the help of the respins.

The low-paying symbol category consists of the royal cards plus the ten-card and is expectedly on the low-end of the payouts spectrum. You can get your full bet returned only for four ace symbols across the reel set and the biggest win thereof comes from five aces.

I've only had a couple of encounters with the game for the simple reason that the low payouts are not justified by the King Midas symbol making more frequent appearances. And since that is the only feature of the game I was scratching my head during long bouts of winless spins.

Midas Touch is a highly volatile game so a very big win may crop up when you are least expecting it, but this is not the game for me this period. 1800x your bet, or more, sounds like a lucrative proposal though.

Browse casinos with Midas Gold and other slots from Red Tiger. Create an account and try the game for free before making a deposit.

You can play Midas Gold in English, Finnish, Swedish, German and 18 other languages. 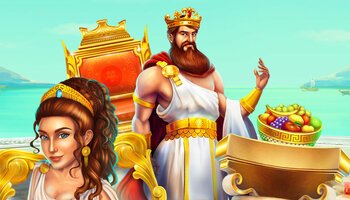