Mighty Arthur is based on the famous and mysterious king of England. The slot brings to life not only his famous exploits but also the different characters that are part of his legend.

The slot is set in early England, with the background showing Camelot surrounded by the classic English countryside. The game was released by Quickspin in 2017, giving players a 5-reel, 3-row playing field to play with their favourite knights and heroes. With 20 paylines and Medium Volatility, the game is great for casual players.

The graphics are great but that’s something I’ve come to expect from this developer. The different characters look realistic and recognisable. Various mythical and medieval items fill up the high-paying symbols while the low-paying symbols are made up of card letters. I’m not a fan of that but there’s not much we can do about it either!

It seems the creators put a little more time and effort in the music this time as it comes with rather heroic sounding fantasy music. A lot of violins and drums that set the beat. When there’s a win we’re rewarded with a fitting burst of trumpets and string instruments. It wasn’t overwhelming but it did feel like an addition to the setting.

The game has quite a high number of symbols that influence the volatility. With the use of colours and shapes, these do stay easily distinguishable. When there’s a win, the game makes a point of framing the tiles involved to indicate the win line.

There isn’t a lot of difference between the highest and lowest symbols when it comes to the payouts, and only the 2 characters and the Wilds pay out the starting bet with a three-of-a-kind win. Some of the features help balance this out but it’s important to keep in mind that a single small payout is not likely to make back your bet.

Mighty Arthur has a nice collection of features even though not all of them appear as often as I’d like. First a quick overview:

Wilds play a big part in Mighty Arthur, appearing in 3 different shapes. The most common is the regular Wild that appears randomly during the base game and the free spins mode. It doesn’t offer any special functionality.

The Merlin Wild showed up rather frequently as well, although it wouldn’t always fill the entire reel. The game does nudge the Merlin Wild up or down to help it fill the reel often though, but not always. If it only covered 1 tile in the base game it would not be nudged, while in the free spins mode it seemed to always get moved into position.

This Wild is stacked which fills the entire reel. When it does, Merlin will animate, slamming his staff onto the ground and conjuring up between 2 and 6 extra wilds to the screen. I found this to often be good for at least a few wins but it wasn’t guaranteed.

Finally, there’s the Arthur Wild. This Wild is very rare and I only saw it appear 2 or 3 times during my time playing. Arthur appears on reel 3 and expands into a Colossal Wild, expanding to fill reels 2, 3 and 4. Counting as a Wild, this instantly creates 20 four-of-a-kind paylines. It was the best way to get a big win but it was also extremely rare. I never saw the Arthur Wild appear during the Free Spins mode, but I don’t think it’s impossible.

All in all, I enjoyed the features that Mighty Arthur brings to the round table. The Wilds play a major part in getting wins but they are so common that they bring the volatility of the whole game down to medium.

Mighty Arthur takes the concept of one of England’s most famous and popular legends and brings it to life in a fun, casual slot. The game isn’t difficult to get into and I imagine both casual and experienced players will have a good time playing it. The features are easy to understand and offer some variety during the gameplay.

The game looks great and has a great amount of detail put into it. The music adds some extra atmosphere into the theme, while the different characters are drawn in high detail. I especially liked how the Arthur and Merlin wilds were animated.

Players can choose a bet between £0.20 and £100 per spin, but the max. win of 621x your bet is a little disappointing. That said, getting big wins might have been a little easier in this slot than in others so making the jackpot too big might not have been feasible.

Browse casinos with Mighty Arthur and other slots from Quickspin. Create an account and try the game for free before making a deposit.

You can play Mighty Arthur in English, Finnish, Swedish, German and 23 other languages. 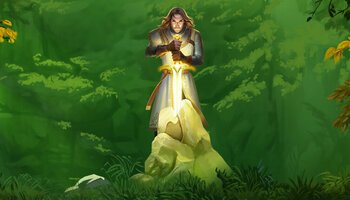