Minotaurus is about the myth of the Minotaur that roams a labyrinth and is finally killed by the hero Theseus. The slot features not only the legendary half-man, half-bull but also Theseus and the princess Ariadne. The slot further features re-spins and stacked Wilds.

Created and released in 2015 by developer Endorphina, Minotaurus takes a look at this well-known myth and places it into a slot format. The setting shines through in most aspects of the game, as the background shows us in one of the dimly lit corridors of the labyrinth while the symbols are mostly related to the myth itself.

The Minotaur itself plays a prominent role in the game as it acts as a Stacked Wild and activates Re-Spins. The game has a 5-reel, 3-row playing field where the symbols look very large and detailed. There are a total of 10 paylines. Unfortunately, getting a win won’t show the payline with a piece of red string but a simple line.

The other symbols are similarly part of the story, with the hero Theseus and the princess Ariadne being the highest-paying symbols. Ariadne was madly in love with Theseus and famously gave him a ball of yarn to help him find his way out of the labyrinth after he killed the monster. I wasn’t a big fan of the card letters to fill out the symbols but at least they were made to fit the Greek style of the setting.

When it comes to the sound, Minotaurus has a simple but effective low humming sound that plays, which fosters the idea of being deep underground in a labyrinth. We also hear someone walking as the reels spin, which I thought was a clever sound effect. Sometimes we can hear something laughing in the distance, although I’m not sure if the Minotaur in legend was really that menacing.

The game has symbols that are largely related to the setting. The Minotaur itself appears as a Stacked Wild and is actually animated at that point, triggering the Re-Spins while he grunts and stomps on the ground. The other symbols aren’t quite as animated but the high-paying symbols do show some original movement and don’t just lightly rotate or show some sheen on them like the card letters.

As you can tell, the payouts for the symbols is rather high, even for the low-paying symbols. This fits the High Volatility as wins aren’t especially common but getting a win usually does pay off in a bigger way. During my time playing, I found that my funds tended to go above what I started with, although this is obviously not a guarantee. Players can pick a bet between £0.10 and £100 to test this for themselves.

Minotaurus is similar to other Endorphina slots in that it doesn’t have too many features but it doesn’t have the same features that other games by this developer usually have. Even though there aren’t a lot of them, they do have some impact on the gameplay:

The base game gives wins occasionally, fitting the volatility. I found the game to be quite interesting to watch thanks to the animations that were part of the game. In general, the base game doesn’t require a lot from the player and I spent a lot of the time playing passively.

Sometimes the Minotaurus shows up and fills the reel it appears on. This will pause the game and show the mythical beast shouting and starting the Re-Spins. These are interesting in how they are implemented.

The game doesn’t give you a set number of re-spins but it will continue until you get a win. At the same time, a multiplier increases with every spin. The multiplier starts at 1x and goes up with every re-spin until there is a win. At that point, the currently active multiplier is applied to the win. Sometimes it would only pay out a 1x multiplier but I’ve had times where I got a 5x multiplier.

The other part of the Re-Spins mode is that the Minotaurus stays as a Stacked Wild on the screen during this mode. It won’t move and will eventually likely help in creating a win. During my time playing, I found the Minotaurus to only appear on reels 2 and 4. It’s best for the player if they appear on reel 4 since it will require more time for the game to generate a winning bet line, which will mean a larger multiplier, but the Wild will also automatically make it into a four or even five-of-a-kind win. Even better when there are multiple winning paylines!

The volatility comes through here, with some spins granting me more than 100x my initial bet and other ones only paying out as much as a regular win. It’s up in the air what you’ll get. There is a max. win of 1,160x your bet but I didn’t feel like I was ever close to winning it.

Minotaurus is a valiant effort by the developer to create something unique and special, with a large number of animations, a good amount of atmosphere and a few interesting features. Even though it doesn’t break the mould when it comes to classic slots, the overall experience was quite entertaining.

There aren’t a lot of features to make use of but the ones that are there work well together. The idea of making the Minotaur not only the focus of the game but also the crux of all the features was a clever idea. I could have come up with some more subtle ways to make the slot fit the setting better. Changing the card letters to original symbols would have helped, as well as using yarn to illustrate the winning paylines for example.

Players that are looking for something original without being too different from the classic gameplay will probably enjoy Minotaurus. The graphics are getting a little dated but their originality and the animations help at keeping it relevant.

Browse casinos with Minotaurus and other slots from Endorphina. Create an account and try the game for free before making a deposit.

You can play Minotaurus in English 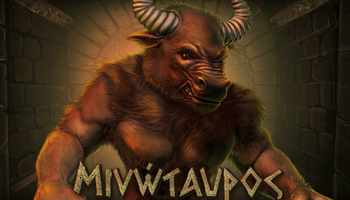