Mirror Mirror tells the tale of Snow White and the Seven Dwarves, played out in a NetEnt slot! Rewards and treasures are sure to be buried in the Dwarven mines.

Originally released in 2018, Mirror Mirror is the latest one and it shows with some of the effects. There are a bunch of particles all over the screen, creating a wispy sense of magic in the background. Speaking of the background, this places us firmly in the midst of hilly highlands. We can see the mine in the corner and Snow White standing in the bottom left.

The 5-row, 3-reel playing field holds a total of 243 paylines, which means that the same symbol on consecutive reels will result in a win. I liked the way the game looks but it also resembles the other two Fairytale Legends a lot. That’s not a bad thing but at the same time, I feel like NetEnt could have improved on it over time as well.

While playing the soundtrack stays in the background. It’s a simple but mythical tune that fits the style well, occasionally spiced up a bit when getting a big win or activating one of the bonus features. Even then, the music stays appropriately fantastical to not shatter the illusion.

Mirror Mirror has a rather standard division of symbols. The high-paying symbols are specifically fitted to match the theme of the game, while the lower-paying symbols are high-cards. I often wonder if developers do this to keep players from being confused, or if it’s a cost-saving method to avoid having to develop completely new symbols.

It doesn’t detract from the enjoyment of the game at all, but it does mess with the context a bit. Not just here, but in any slot that does it.

As you can tell, the coin rewards aren’t very high, even for the highest paying symbols. I think that’s because of the Low Volatility and the 243 ways to win, which make it quite a regular occurrence that you get a win. To balance this out, they lowered the win.

That’s quite a lot but luckily most of the features are exclusive. You can only get one Fairy Feature at a time, and you can only select one Treasure Chest at a time. This helped me a lot in getting my head around what was happening.

The Mining Bonus was the highlight feature for me. It shows us going into the mine where the Dwarves work and it looked great, sweeping down the halls until we end up at the spot the dwarves are excavating some giant crystals.

The goal here is to simply choose the different crystals, each worth a certain coin value. You can select them in any order and as many as you want, but only until the pickaxe breaks. After that, you are awarded the coin win and returned to the base game.

If you’ve played the other Fairytale Legends you’ll have a good time playing Mirror Mirror. The slot offers many of the same features and thrills. It even looks very similar! The Fairy Features don’t thrill me that much because they’re very random and more often than not, don’t pay off.

The bonus game was the highlight of the game. It has a great intro, the actual game part is fun and honestly, the dwarves have way more character than Snow White does. There’s one operating a crane, two holding a bag catching your crystals and there’s even a taskmaster taking notes. Meanwhile, neither Snow White nor the Queen does anything at all except appear on the reels.

If you prefer small, simple slots I would suggest you keep looking for other slots. Even though the basic gameplay is very easy, the game also got interrupted regularly by all the different features. It’s possible to simply put on autoplay and do something else but that was clearly not the intent of the creators.

The choice between bets ranges from £0.10 to £100 per spin which matches the low volatility well. The max. win is 3,645 x your bet which does a lot to make up for it, but the regular payouts are very low so I wouldn’t count on it too much!

Browse casinos with Mirror Mirror and other slots from NetEnt. Create an account and try the game for free before making a deposit.

You can play Mirror Mirror in English, Finnish, Swedish, German and 20 other languages. 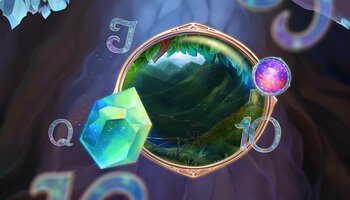