Anyone looking for thrilling action can put on an imaginary intelligence agent's hat and check out Mission Cash.

The game is a little bit older release from Play'n GO and doesn't hope up quite well against innovation in the field.

A good old layout of three rows and five reels spins across 20 paylines. The gameplay is entertaining. I've had fun while playing because I found the theme and the graphics to be well-drawn and engaging.

I don't mind that the game is older because of the extra features. The base game comes with the feature that defines it - expanding high-paying symbols that can post on multiple reels and combine with the wild.

Mission Cash puts you in the role of a coordinator of spies. You can think of yourself as M in James Bond. She's always been pretty badass for her mysterious dealings in the world of spies.

The graphic design reflects the premise with the background being a control room filled with radars, monitors and communications gadgets. On the reel set, we have a cast of characters that step into the game as single-square symbols but also as fully-expanded action figures.

I think that Mission Cash does just enough animation to arrange for dynamic gameplay. The soundtrack is a hard-hitting bossa-nova track that echoes the quintessential spy movie ambience. For that matter, it’s the best choice for the game.

The gameplay's pace and dynamics are determined by the ever-present green crosshair. The element is there to help improve the winning outcomes in the following manner.

When the crosshair lands on either one of the agents' symbols, that symbol expands across the entire reel and becomes Wild.

The position is held in place for the coming respin, which the game awards automatically.

Additional Wilds, which you can get by way of the crosshair, trigger additional respins.

The experts at Play'n GO have opted for an innovative way for triggering the free spins bonus.

You don't need three scatter/bonus symbols to win the bonus. You only need the crosshair to point at the scatter symbol in exchange for 8 free spins.

The bonus can trigger again by repeating the same outcome - crosshair on the gun, for more action with the potential expanded Wilds and respins.

For a game that's heavy on the respins, it surprises me to see such a decent paytable structure.

Mission Cash can pay a quarter of your bet for landing three clubs or diamonds. That's a good start because the remaining winning combinations are a lot more promising.

The game lacks a standard Wild symbol, but I don't see that as a minus. It's just less clutter on the reel set and more room for the eventual expanded Wilds.

And no surprise there, the expanded Wilds are paying symbols that have a universal payout structure for all four: 1.5x, 7.5x and 50x your bet for three, four and five matching symbols.

The standard paytable has the following potential outcomes:

Mission Cash is an online slot whose gameplay is persistently dynamic thanks to the extra features. The base game is filled with action because a single expanded Wild triggers a respin. Subsequent respins can result in additional Wilds and this can make it easier to connect two or more matching symbols for a win.

The best part of Mission Cash is the free spins bonus. You do get 8 initial spins, but if you add the potential respins, the feature game can play longer and take on a lucrative end-result. Simply apply the potential of the Wild respins to the bonus feature to trace the way in which you can land up to 5,000x your bet.

Overall, I think Play’n GO has created a memorable slot. The comic-book-like design gives it a visual edge and the soundtrack is top-notch. All of the above should make Mission Cash worth exploring.

Browse casinos with Mission Cash and other slots from Play'n GO. Create an account and try the game for free before making a deposit.

You can play Mission Cash in English, Finnish, Swedish, German and 30 other languages. 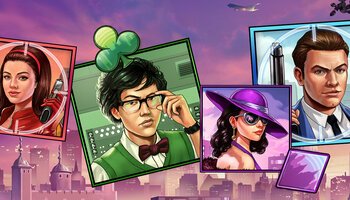