Monopoly Megaways brings the most famous board game in the world to life by adapting it to a video slot format. This slot not only has a familiar appearance but also introduces free spins, multipliers and wilds to the game.

Developed and released by Big Time Gaming in 2019, this game is relatively new and does a great job at bringing the traditional board game to life in an adapted form. The gameplay is obviously not exactly the same as the original but the many elements are kept alive all the same, with the ability to build houses and hotels, getting Chance cards or buying different properties.

The graphics are simple and are largely related to the game, with the familiar mint green as the dominant colour. The symbols are split between the different figurines players can use in the board game and the standard card letters that most slots use to fill out the collection. There isn’t much to see in the background and the game is also quite light on animations.

Seeing as how the game uses the megaways function, this means the number of paylines can vary each spin between 64 and 117,649 win lines. The game has 6 reels which each can vary in length between 2 and 7 symbols.

Monopoly Megaways uses a standard collection of symbols to fill the reels, with the high-paying ones based on the board game while the low-paying symbols are card letters. None of them has animations, even when part of a win. Instead, there is a small Monopoly man at the bottom of the screen who moves along whenever there’s a win, hitting famous streets and locations in the UK as he goes.

The game has the potential max. win of 5,882,450x your bet but this is clearly a calculation of the best possible outcome and shouldn’t be considered a possibility. Regardless, it’s probably the biggest jackpot that’s not a progressive one I’ve ever seen listed. Players can bet between £0.20 and £20 per spin, with even the smallest bet becoming a huge win should this jackpot ever be hit.

Monopoly Megaways goes quite far in trying to replicate the board game in a video slot form, which results in a big number of elements. They’re not all necessarily different features, but they do operate independently of each other. The game largely revolves around the free spins mode since all the properties accrued during the base game will apply bonuses during the free spins part.

This game is pretty unique in how it plays, as players collect rewards that are only activated once the free spins mode is triggered. Every win the player gets, the Monopoly guy moves across the board, landing on different Utilities, Train Stations and properties. Landing on the first two will purchase them while landing on a property after the third consecutive win will add a house.

When a property has 5 houses on it, landing on it again will trigger the free spins mode. This is when everything that was accumulated up to that point collected. The Utilities each add a 1x multiplier, the Train Stations add 1 extra free spin and each house on the properties the Monopoly guy lands on will add another 1x multiplier.

This means that the longer it takes for the player to activate the Free Spins mode, the more they’re likely to profit off of it. It’s not easy to trigger the free spins mode but once it does, players can expect a lot of free spins as well as a bigger multiplier, which can theoretically increase infinitely.

Monopoly Megaways is an adaptation of the popular board game that stays true to the spirit and style of the game, while still turning it into an interesting and fun video slot. Players are shown all the famous images and names that they know from playing the original game.

The features that are added to the game cleverly make use of the mechanics that are part of the board game, and make for an interesting game experience. It is important for people to be prepared for a slow burn, even with Medium Volatility the game does not award wins very highly and triggering the free spins mode is a question of time.

If you’re looking for a slot with a megaways feature or you’re just a big fan of Monopoly, this game is definitely a recommendation for all but the most stalwart fruit machine enthusiasts. Give it a try to see what is possible.

Browse casinos with Monopoly Megaways™ and other slots from Big Time Gaming. Create an account and try the game for free before making a deposit.

You can play Monopoly Megaways™ in English, Swedish 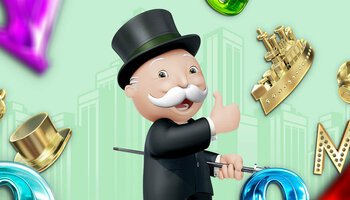