Monster Lab has a monstrous professor work on a series of experiments bringing to life a group of increasingly bizarre and disturbing creatures. With the aid of Stacked Wilds, a Bonus Game and Free Spins the experiments seem to have been a success.

Created and released by Evoplay Entertainment in 2014, Monster Lab is set in the heart of a giant laboratory where a 5-reel, 3-row playing field shows us the different gestating tubes where strange monsters are created. The entire slot is built around this premise and I think the designers did an excellent job considering the large number of animations as well as unique symbols.

The professor that runs the laboratory is standing next to the slot and pulling the lever that causes the reels to spin. With 20 paylines the game is quite cheap in its wins resulting in a Medium Volatility. The background is largely static except for a monitor but both the professor and the monsters are animated, especially when there’s a win.

The sound-design during the base game is simple and pretty quiet, with no real music playing. The reels spinning makes a bubbling sound as the monsters are floating in liquid, and different other sound effects can be heard during certain events like a win or the bonus game. It’s hard to say what would be fitting music for a slot but the music I did hear didn’t feel out of place.

Monster Lab has a load of unique symbols that are mostly different kinds of bizarre-looking monsters. The monsters aren’t too creepy but just look strange. Whenever they’re part of a win the win line is highlighted and the monsters make some subtle movements. It’s not much but I appreciated the effort.

Players can pick a bet between £0.20 and £300 to influence the total wins but considering the medium volatility, I would suggest carefulness when playing at first. In my experience, Monster Lab first started with a lot of useless spins before I got some bigger wins through the Free Spins mode. Until that activates and you get a surplus, I would argue a smaller bet is smartest.

The payouts aren’t very high but with the Stacked Wilds, it’s not uncommon for multiple bet lines to win at the same time. The Free Spins mode and Bonus Game both also triggered quite frequently, which further helped in getting bigger wins. Still, getting a win isn’t automatically enough to make back your spins.

Monster Lab has many of the features that other Evoplay slots also use, although the implementation of the Bonus Game is a little different than most. Even so, I don’t think a lot of slot players will be terribly surprised by the features that are found in this game.

During the base game, the player will see the Stacked Wilds show up the most frequently. During my time playing, I didn’t see more than 1 appear on the screen at the same time but I didn’t see it mentioned anywhere that this was a rule. It’s quite possible some players might get 2 or even 3 at the same time. Whenever a Wild appears it will always create a Stacked Wild which I thought was a very nice addition.

The bonus game triggered often while I was playing, and considering it awards the player with a guaranteed coin win it’s actually quite good. There was no real rhyme or reason to playing it, the player is told to shoot a monster into a vial using the pressure meter to decide how hard or how soft. While I was testing it though it didn’t seem to have any effect on it.

One good thing to note is that it doesn’t appear possible to miss a vial so you will always get a coin win. The more Bonus Symbols you had on screen the more shots you get, between 3 and 5.

Once the Free Spins are spent the player gets to choose one of 3 bonus cards, holding either another 20 free spins, a 2x multiplier or a 3x multiplier. If the player picks the extra free spins they will not get another choice of bonus cards when they run out again.

I thought all the features are frequent enough to feel like a part of the game and they each had a big enough impact on the game to feel worth the effort. Playing for a longer time, I did notice my funds declined quite steadily so even though it felt like the features were important, it’s not a guarantee you’ll end up in the positive.

Monster Lab fits nicely in the library of Evoplay Entertainment, with some extra details and animations that make it stand out slightly. The gameplay is simple but entertaining enough to keep the player going while there isn’t anything confusing.

If you like slots with a standard game experience but a lot of movement and some features that change up the gameplay you’ll have a good time. I don’t think the real classic slot fanatics will enjoy it because it departs quite readily from the old-school fruit machines. Meanwhile, modern players might not find it experimental enough!

Monster Lab has a max. win of 2,784x your bet which isn’t as high as some other slots offer but it’s in the higher reaches when it comes to Evoplay slots. Also something to keep in mind.

Browse casinos with Monster Lab and other slots from Evoplay Entertainment. Create an account and try the game for free before making a deposit.

You can play Monster Lab in English, Chinese 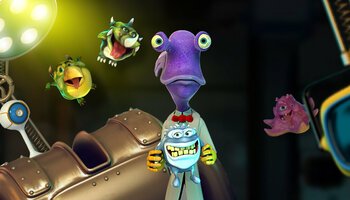