Ever wanted to win with over 150 symbols? This is possible in Monster Pop, a cluster slot with an expanding playfield.

Betsoft’s Monster Pop is full of adorable little monsters. The game excels in both audiovisual and mechanical aspects. It might not technically be an innovative game, but it takes a bunch of good features and combines them to a great slot.

Grid-based cluster mechanics and expanding fields have been popular lately, and Betsoft had a clever idea of combining them. You can expand the grid multiple times and cram up to 169 symbols on the screen at once. Add cascading wins to the mix and you got yourself a pretty wild slot.

Monster Pop is an exciting and entertaining game. The game has a decent balance and some nice potential for big wins. The slot says it has medium volatility, but I’m guessing it’s a pretty high medium. This is mainly because of the cascading wins, which can work wonders.

Now it is time to head down to the monster caves and meet the little critters.

Monster Pop is a funny game that doesn’t take itself too seriously. The little monsters have a lot of personality, even though they do remind me of the Monsters Inc. films. I wouldn’t bat an eye if I saw one of these critters waddling along the hallways in one of those movies.

The game generally looks nice and the user-interface is very beginner-friendly. Even the rules are explained clearly, which is as common as you would like it to be.

There is one thing that did bother me with the design, and that is the use of colours. The colour-scheme looks nice in general, but some of the symbols are just too similar. Especially when the game zooms out and you need to rely on the colours more than the shape. Then the teal, the light-blue, the blue and the purple monsters got mixed up a lot.

The music plays well with the theme. It’s joyous, playful and adventurous. The game truly sounds like you are exploring a cave full of little monsters. It may not be that memorable, but it is fitting.

Reels are full of cute little monsters. They all look good and have a great deal of personality, but the colours could vary a bit more. There are a total of 8 regular monster symbols and 3 special symbols.

Even though the symbols can be split into two tiers, the paytable is actually pretty balanced. The wins are quite linear and you care more about how many you get, rather than what you get.

The special symbols are a regular wild, a scatter that activates the free spins and a Monster Cloner, which is basically the best symbol in the game. That symbol will duplicate the row or column it is on and expands the playfield. You start off with a 5x5 grid and can go as high as 13x13.

Betsoft didn’t want to make this feature too good, so there is a caveat. During the base game, the used cloner symbols stay on the field and will start to clutter it up. You can’t get rid of them in any way. Free spins are a bit easier because there the reels will not reset between spins.

The game has medium volatility, which is only obvious when you look at how much you actually won. The mechanical features are wild and some spins are so much better than others. Because the game has no multipliers or any way to pump up those wins, you don’t actually get insane wins.

What you are still looking for, is to chain up as many smaller wins as you can. Free Spins feature is the best place to get them, but it’s pretty hard to activate. Just try to expand the field, either by hitting the cloners or angering the monsters.

When you get a win, the winning symbols are removed from the screen and new symbols fall in their place. They can, in turn, create more wins and the chain just keeps going until there are no new wins.

When you get a cascade and don’t get a winning combination, then you have a chance of activating the Monster Fury feature.

Everyone knows that getting a cascade and not winning is annoying. Even the monsters on the screen get angry because of it. Occasionally after a losing cascade, the Monster Fury feature can activate and the creatures create more wins. They can either shuffle around or they can add a couple of Monster Cloners on the reels to make sure you win.

Monster Cloner symbol is one of the best things about Monster Pop. They will create a new horizontal or vertical line, or sometimes both, that are clones of the ones they are on. The only difference is that instead of another cloner, they add a wild symbol instead.

You start off with a 5x5 grid and can expand it to 13x13. During the base game, the grid will always reset after each spin.

Flaming Sphere is a scatter symbol that can activate the free spins. You need at least three of them, and the more you have, the more spins you get. The game calculates the spins a bit strangely, but the end result is pretty regular. You get 7 base spins and then add 1 for each Flaming Sphere. This means the minimum number is 10.

The Free Spin feature is worth a lot, but it activates a lot less frequently than you would like. First off, you can get more spins by just getting Flaming Spheres. Each sphere is worth 1 extra spin. Then the second great thing is that the grid will not reset between spins. Getting Monster Cloner symbols is amazing here.

Monster Pop is a fun game and I felt it to be more balanced than other cluster-based games. This also means that it’s harder to hit those giant wins, but that’s the price you have to pay.

Betsoft did a great job with this game. It’s hard to find anything that is really wrong with it, apart from some of the colours. It just comes down to personal preferences here. If you like cluster slots, then you should definitely try this one out.

All and all, the game felt fun, the mechanics were well implemented and I had a good time playing it. It may not be the best game ever, but I know I will come back and play it again.

Browse casinos with Monster Pop and other slots from Betsoft. Create an account and try the game for free before making a deposit.

You can play Monster Pop in English, Finnish, Swedish, German and 19 other languages. 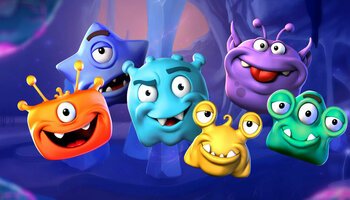