More Gold Diggin' by Betsoft takes you underground for a cascading wins adventure that gets the boost of win multipliers.

It looks like this release is a follow-up to Gold Diggers from the same provider. The theme may be the same, but the gameplay and features are completely different.

The layout of three rows and five reels swaps symbols consisting of oil gunk, TNT, gold nuggets and other materials that can be found in underground mines. It may not sound like an overly exciting premise, but I was surprised at how well everything clicks together.

One of the most exciting details about More Gold Diggin' is its maximum payout potential of 18,640x your bet. By all means, this is no ordinary dig thanks to the free spins bonus which can lead to amazing winning outcomes.

I've played the game several times and enjoyed its paced dynamic. If you are looking for a game that doesn't roll your wagers in a flash, More Gold Diggin' is the game to consider playin’.

The characters of Gold Diggers have started a new mining operation. Although simple by design, I'm really feeling the blocky symbols. These consist of some kind of green slime, oily gunk from mining equipment, a couple of gems and diamonds, minerals and gold.

As I said, everything about the game clicks together in a perfect manner. Some of the symbols are animated, but nothing over the top. On the other hand, the miners sprint to life when you make a win. It's a nice touch in terms of the design, along with the exploding sticks of TNT.

Another area where Betsoft has decided to keep it simple as opposed to convoluted. Most of their older games come with three, sometimes four or five features, but not More Gold Diggin'.

In addition to the Wild symbol, represented by dynamite sticks, there is a bonus symbol. Everything else about the game comes down to the cascading wins system and win multipliers.

As per the usual for this system of payouts, landing a winning outcome causes the winning symbols to disappear and make room for a new drop

You can have multiple winning outcomes from a single spin, as long as the incoming symbols connect to three or more matching items on the 25 paylines.

The base game comes with win multipliers and these are tied in with the cascading wins system. The first win triggers a 2x win multiplier, which is factored into the upcoming winning outcome.

Basically, every subsequent win is given a boost by a win multiplier of 2x, 3x and 5x, in that order.

The barrel of TNT represents the bonus symbol. The bonus feature triggers when you get three of these symbols on the first three reels.

Everything about the bonus is the same as the base game, except the win multipliers. Instead of 1x, 2x, 3x and 5x you can win 3x, 6x, 9x and 15x your winning outcome for the first, second, third and fourth explosion.

If your cascades keep going after the fourth win, the 15x win multiplier is locked until there are no more wins. Notable detail - you can get another triplet of TNT barrels and extend the frenzy.

The free spins bonus is the reason why I like More Gold Diggin'. Players can enjoy a more recent game with cooler graphics, like Fire in the Hole, but the win multiplying feature in this game is straightforward.

You can have one spin triggering a cascade of winning outcomes towards an amazing effect, especially during the free spins bonus where you get 10 spins for a blowout.

Betsoft has enabled a wide range of coin values and BET levels. The minimum bet is 25p per spin, which comes by way of 1p per payline. The maximum stake of £1.00 lets you up the ante to £25.00.

One of the gameplay options is the Double Up game. The corresponding button in the bottom-left corner lets you put your winnings to the stake, for a chance to double them.

In terms of symbol payouts, More Gold Diggin' doesn't stand apart from other games in its category. The winning outcomes for three matching symbols are literally, pennies to the pound.

The same is true for the first half of the paytable regarding combinations consisting of four of a kind. On the other hand, there are few symbols that can pay big cash, if you get five of a kind on a payline.

But, as you may be aware, there is a good reason for the generally low values - it is called cascading wins and win multipliers.

The full paytable structure, presented as symbol value times your bet, is as follows:

I am not going to sugar-coat it. More Gold Diggin’ can frustrate your expectations because of the low payouts for three matching symbols. Also, I wish the Wild had appeared in the right place as often as it were necessary, but that’s up to the high volatility.

Right, this is indeed a highly volatile game, so you can have very little turn up in dozens of spins, but the huge max payout of 18,640x your bet means only one thing. More Gold Diggin’ can surprise you when you are least expecting it.

Browse casinos with More Gold Diggin' and other slots from Betsoft. Create an account and try the game for free before making a deposit.

You can play More Gold Diggin' in English, Finnish, Swedish, German and 22 other languages. 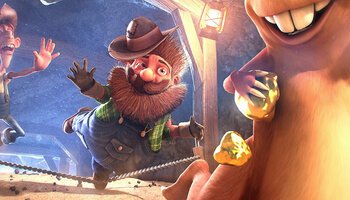