Strap on your gloves, put up your dukes and get ready to trade blows in this cartoon-styled show of pugilistic prowess.

Let’s start with the elephant in the room. Mancala Gaming released a bunch of games as their first batch, that are mechanically identical. These slots just have different themes and the Dice variants just have dice on the reels with one side being the actual symbol.

I know some people will think of this as lazy design, but I’d like to think of it as interchangeable themes to a fine base. It’s like a cover on your phone so it looks right for you. For example, if you don’t like boxing, you can try out the same game with a fishing theme, set in the Wild West or with vampires. Whatever suits you the best.

Now that we got that out of the way, we can dive into the ring and see what Mortal Blow Dice brings to the table. For starters, it has very low volatility and Win Both Ways feature, so you know you are getting a lot of smaller wins.

There is excitement in the air, as the two fighters are measuring each other up from the safety of their own corners. Everyone is ready and it’s time to get this show on the road.

Mortal Blow Dice is a cartoony slot and the two boxers are the perfect caricatures. Personally, I prefer the more light-hearted look. I’m not sure I’d enjoy a slot with two realistic fighters who have been beaten to a bloody pulp.

The game has a good design and it is easy to play, except for the dice. The actual symbols are crammed into a much smaller space and the dice don’t play any part. I would recommend playing the regular Mortal Blow if you are having a hard time telling the symbols apart.

When it comes to sound design, Mancala Gaming did a great job here. The music is exciting and the sound effects have a real boxing feel to them. Some sound effects do get repeated a bit too often but that is not a big issue.

Mortal Blow Dice is a fairly traditional slot with some common features and an easy base game. This is a great choice for a beginner or someone who just likes the classics.

There are a total of 11 symbols on the reels, four low-tier card numbers, four high-tier picture symbols and three special symbols. The wild will substitute other symbols on the paylines, the Free Spin symbol is a scatter and the first aid kit is the bonus symbol.

There is a notable difference between the low-tier and high-tier symbols. Wins from the lower symbols are much weaker and you always need multiple hits or at least four of a kind to get a positive result.

There is never a lack of wins when it comes to Mortal Blow Dice. The game has low volatility and Win Both Ways, so you know you are constantly hitting something. Sure, most of what you win is around what you bet, but it’s something. It’s not that difficult to keep your bankroll steady.

To get a bigger win, you need to activate one of the special features or hit multiple paylines at once. A large win in this game is around 10x your wager, which might feel a bit lacklustre to some players.

Winning is a bit easier with the Win Both Ways feature. Now your winning combination can start from the left or from the right. A single payline can only have a single win on it. In the unlikely case that there are two, then only the best one will be paid.

Free Spin symbols are scatters and you need three of them anywhere on the reels to score some free spins. These spins don’t have anything else special, but they are a good way to rack up wins.

The first aid kit symbol is a special bonus that can be activated with just a single symbol. At the start of the bonus game, you get to see five prizes that are available. The cards are then turned over and shuffled. Pick one of them and you can win either a decent amount of cash or between 7-9 free spins.

Mortal Blow Dice is a fine game that is reminiscent of the classic slots from a decade or so back. It doesn’t really bring much new to the table, but it’s an okay game. If you take into account that this is part of Mancala’s first batch of games, then it gets a pass.

The biggest problem I had with the game was its tempo. You can’t really speed up the game in any way and seeing those win animations over and over is tedious. If the slot had a quick play mode or some way to play faster, it would be better.

The thing I liked the most about it, is the constant stream of wins. It is easy to see why a developer would make a game that hands out small wins all the time. The player gets to feel like a winner, even if the win was less than what they paid for the spin. It’s a feel-good game, even if it’s not a real moneymaker.

This game has one more great thing going for it. You can use it to fill out your bonus wagering requirements.

You can play Mortal Blow Dice in English, Swedish, Spanish, Italian and 4 other languages. 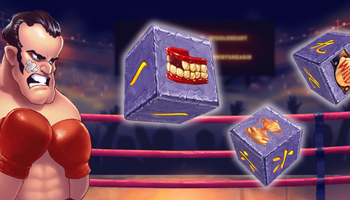