Mortal Blow is a rather scary title for a slot about boxing since it’s generally not supposed to be fatal, but luckily we don’t see any fatalities here. Instead, we can enjoy Free Spins, a Bonus Game and Wilds to get us to the bell.

This game features a 5-reel, 4-row playing field with 25 paylines that count both ways, meaning they are valid going left to right and vice versa. As a Mancala Gaming slot that was released in 2020, the slot comes across as well done but rather simple. The graphics are a mixed bag with some of the symbols and the background animated while the card letters look downright ugly.

The background shows us the boxing ring in a massive stadium while the two fighters are taking a break on either side of the game. These fighters are slightly animated, moving as if they’re breathing and looking at each other. The high-paying symbols also have some related animations like the first aid kit opening up.

If you play with the sound on you’re treated to a generic rock song that doesn’t really seem to fit the setting but gives it a nice up-tempo feeling. There is a bell ringing anytime you get a win but other than that the sound effects are pretty much absent.

Mortal Blow features a good selection of symbols which combines with an average number of paylines and the Pays Both Ways mechanic to land on Low Volatility. I found this to fit my experience pretty well, as the game rewarded me often even though the wins were small.

It’s possible to change the outcome a little by changing the bets, picking one between £0.25 and £22.25 per spin. The max. win of 2,555x your bet is not especially high but considering the low volatility still a good amount.

The symbols in the game are original and created for the game, but the card letters look very strange. They are seemingly carved out of rock and crackle with lightning when they’re part of a win. It seems like they were lifted from a different slot and used here.

Mortal Blow has a number of different features that change up the gameplay but won’t be anything unfamiliar to experienced players. The slot is perfect for people that enjoy a relaxed time playing a slot while still having an opportunity at a big win.

You’ll encounter the following features in the slot:

The Pays Both Ways mechanic is common, activating frequently and helping in the creation of wins. You’re likely to see this feature appear the most out of all of them, making up roughly half of all the wins in the game.

I found the Wilds to show itself quite often and it was helpful in creating wins. The paytable states that it substitutes all symbols but I noticed that it doesn’t replace either the Bonus symbols or the Free Spins symbols. You’ll still have to get those on the screen to activate them as normal.

The Bonus Game is nothing people haven’t seen before. I did like that it requires only 1 symbol to activate and that it activates frequently as well. Once it activates, players are treated to 5 blind cards. They are allowed to pick one, each of which can contain either a coin win or a number of free spins. The coin win is awarded immediately, the free spins are immediately triggered.

Finally, we get to the Free Spins mode. This one was considerably harder to trigger, and I usually did this by picking the right card in the Bonus Game. Since this mode is exactly the same as the regular game, players shouldn’t expect any spectacular wins. In fact, I found the Free Spins mode generally to be rather disappointing.

Mortal Blow is a fun little slot with a nice unique concept that gives players a rather standard experience. You’ll get to see a number of nice animations with some original ideas in its visualisation.

On the other hand, you won’t be surprised when playing this game either. The features are carbon copies of hundreds of other slots without any surprises. They hardly work together to create any fun or creative gameplay. Each feature stands on its own and delivers exactly what you’d expect.

This makes Mortal Blow the perfect game for people that enjoy standard, predictable gameplay. It’s a slot that makes it possible to get some big wins while not so experimental that it will require any research into the gameplay.

You can play Mortal Blow in English, Swedish, Spanish, Italian and 4 other languages. 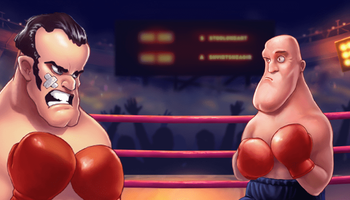