Sit down, turn the Rock Mode on and blow your speakers. This is an amazing slot, built as a loving memory to Motörhead.

Motörhead slot was a heavy release from NetEnt in 2016 in more than one way. The slot is a memorial to Ian “Lemmy” Kilmister, who died just nine months before the release. His death also marked the end of Motörhead as a band, for none of the remaining members felt right to continue without Lemmy.

Motörhead is a part of NetEnt’s music series. It joins the ranks of such great names as Jimi Hendrix and Guns ‘N Roses. All of these are great slots that pay respect to their subject matter.

Apart from the theme, Motörhead is a well-made slot. A well-balanced game, unusual reels, steady stream of wins and some nice special features; these are the things that made Motörhead a good game.

The mood is set from the very get-go. The first thing you see is a clip from ‘The World is Ours’ tour, and the song, what else than ‘Ace of Spades’.

When the game begins, you are greeted with a button that has only one acceptable option. Turn the Rock Mode on. No questions about it, just do it. The soundtrack is all Motörhead. You get to hear such classics as Iron Fist, Overkill and Killed by Death.

The stage is set and the game is on. Everything is made with a metal heart and you can see the love and dedication in the art.

Knowing what happened to the band before the slot was released changes how you see it. There is a reason for the unmanned instruments, dim lights and the fading fog. This is a memory of a time gone by. There is also a special memorial to Lemmy himself. His bass and hat are there waiting for him as ready as they ever were.

Motörhead slot has been designed with a metal attitude. You can see that even in the symbols. The cherries, the bells, the star and even the clover look like they are brushed steel.

There are three special symbols on the reels, the scatter, the wild and the mystery symbol. Wilds and scatters and behave like they usually do, replacing other symbols and giving free spins no matter where they are. The mystery symbol, which features Snaggletooth, will reveal a single random symbol under every single one of them. Getting a field full of mystery symbols guarantees a good win.

The reels are also a bit out of the ordinary. The first two reels have only three symbols, the next two have four and the final reel has five symbols. There are a total of 65 paylines in the game, so there will be a lot of overlap on the early reels.

The game has been balanced out to hand out a larger amount of small wins, rather than a single big one. Looking at the paytable, there are a lot of combinations, that alone would result in you still losing money. The key here is that it is easy to hit multiple paylines at once.

The prizes from five of the same symbol, while playing on a 20 coin bet:

The Motörhead slot has a low volatility and a decent 96.98% RTP. That means that this is a good game for a grinder. If you want to get the most playtime for your bankroll, this is the game for that. It is hard to win a lot in a single round, but the game can go on for a long while.

During the normal gameplay, some or even all of the reels can turn into Mystery Reels. The reels will burst into flames and new stacked symbols appear on them. A Mystery Reel will have massive stacks of mystery symbols. After the spin is over, all the Snaggletooths will reveal a single random symbol from under all of them.

The Bomber Feature is a completely random feature that can activate at the start of any spin. The lights are dimmed, air ride sirens wail and the ground starts shaking. The bombers will drop a few bombs that blow your symbols up and fill them with mystery symbols. Bomber Feature will turn at least 10 symbols into Snaggletooths, which then will all reveal a single random symbol.

There are scatter symbols on the last three reels. Get three of them at once and you are awarded with 10 free spins. During those free spins, the Mystery Reel feature is even better. Now there are also stacked wilds in the mix.

In my opinion, this feature activates too rarely. I have played quite a lot of Motörhead, but have been able to activate it only once ever. It could just be a coincidence, but I just feel like it is too rare of a treat.

Motörhead is a slot that I like. I want to get the most out of my bankroll, so a game like this is good for me. A long-running game accompanied with great music is a wonderful combination.

The special features are interesting. The mystery symbol can offer some serious excitement when you start getting a lot of them at once. On the other hand, the Bomber Feature and the Free Spins don’t activate as often as I would like. I have gone through several play sessions without a single activation.

As a slot, this is a strong one. The theme plays a major role, but it is not solely built on that. If you don’t like Motörhead’s music, it is likely that you won’t enjoy the slot. Even though it is a mechanically good slot, it is still a Motörhead-themed game.

Browse casinos with Motörhead and other slots from NetEnt. Create an account and try the game for free before making a deposit.

You can play Motörhead in English, Finnish, Swedish, German and 20 other languages. 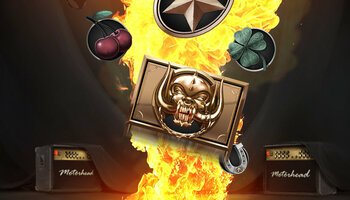