Grab the juicy fireflies and collect unlimited win multipliers! Released in 2020, Multifly’s jammin’ beats take you in the deepest parts of a jungle to meet a family of chameleons.

Multifly is a “win all ways” slot game with several interesting features, including cascading wins and free spins. The chameleons hanging above the reels are to thank for the multipliers, which have no limits. The chameleons are basically the gods of these parts of the jungle and living the life as such, just basking in the sun and filling their bellies with fireflies.

This slot game was made by Yggdrasil which is one of my personal favourites right after NetEnt and Play ‘n GO. Yggdrasil usually makes their games look fantastic and spares no expense while designing them, and Multifly isn’t an exception. It also combines lots of intriguing features and together they can result in massive wins. The cherry on the top is the free spins with multipliers that don’t get reverted back to one.

Multifly, which of course is a wordplay with multiply and fly, is set in a lush jungle. These parts belong to the five chameleons who are enjoying their days, hunting fireflies and hanging out with friends. Friends, such as lizards, toucans and parrots. You get to see them all while playing the game, parrot being the best-paying symbol on the reels.

I can’t think of anything bad to say about the graphics or the visuals in general. It’s colourful, but not too flashy, and the chameleons look like they’re a fun group. The background moves ever so slightly by swaying the branches or flowers, just enough for it to look alive rather than a static picture. When a Wild (or a firefly) lands on the reels, one of the chameleons swiftly gets their tongue out to grab the flying snack.

The soundscape is very thematic and has a rhythmic beat of the jungle music. In a long run, it could easily wear your ears off, but luckily the game allows you to adjust the volume of the background music.

Multifly has five reels, three rows and 243 ways to win. This means that you just need at least three identical symbols on three consecutive reels (starting from the first reel) to win. The placement of the symbol on a reel doesn’t matter.

The winning symbols are removed from the reels and new symbols are dropped to their place. This way, you might get more than just one winning combination.

In addition to the basic symbols, the game has WIlds and Scatters: Wilds substitute all other symbols in the game except for Scatters. Wilds can occur naturally, but the chameleons also add one extra Wild to their respective reel after every winning combination.

Scatters trigger the free games and they can only be seen on reels 2, 3 and 4.

Keep in mind that the same symbol can occur more than once per reel.

Example: Five parrots pay 4x your bet. You have one parrot on every reel, except one of the reels has two. This doubles your payout to 8x your bet.

Whenever you get a winning combination, the cascading wins feature removes these symbols. Right after this, one random chameleon above the reels activates and adds a Wild to an empty space left from the previous winning symbol. This reel also receives a +1 multiplier.

Naturally occurring Wilds can also increase the multiplier of the reel they’re landing on.

The multipliers reset when there are no more wins and the next spin starts.

The mechanism of free spins isn’t that different from the base game. There are two significant features though:

The free spins can not be re-triggered.

Multifly is a fun slot that offers an interesting feature combo. It doesn’t really introduce any new ideas, as cascading wins and multipliers are popular choices for game features. However, the features play along extremely well and the mechanism of reel multipliers has been executed nicely. Especially with the free spins, the element of unlimited multipliers can shine like a secret gem hidden away under the leaves of the jungle.

At times, it’s quite hard to get the free spins to trigger and most of the times, the results of the spins are a bit disappointing. After a few free spin rounds, the usual theme for me was that the spins ended just when the reels started having more multipliers.

Despite the slot being a tad greedy, it still easily gets good grades from me. The quality is impeccable, it’s fun to play and has some serious possibilities for massive win multipliers.

Browse casinos with Multifly and other slots from Yggdrasil. Create an account and try the game for free before making a deposit.

You can play Multifly in English, Finnish, Swedish, German and 18 other languages. 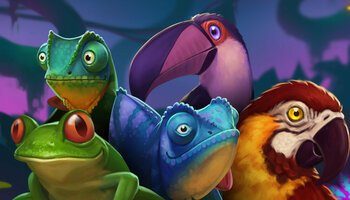