Mysteries of Egypt is placed amongst the rows of statues and the daunting spires of the pyramids in Ancient Egypt, everything soaked in the burning yellow of the sun as the reels spin.

A slot that was developed by RedRake Gaming and released in 2015, Mysteries of Egypt takes the player back in time. Ancient Egypt is a very popular theme for many slot developers and there honestly isn’t that much that can be done to make a game stand out anymore. Other slots in this setting include Leprechaun Goes Egypt, Valley of the Gods, and Legacy of Egypt.

Still, let’s see if the Mysteries of Egypt has found a way to set itself apart from the competition. To start with, it has a 5-reel, 3-row playing field. There are 25 betlines across the screen with no special mechanics that influence this. So far, then, it seems as if it sticks close to the classic approach!

The game looks very pretty, I was especially impressed by the background. There is an entire valley filled with statues and pyramids in the background while the sun gently bathes everything in gold. The reels are seemingly part of a giant pillar in the middle of the screen, decorated with hieroglyphs and reliefs.

I found the sound-design to be rather safe and obvious, staying close to what many people will call Egyptian music. The use of harps and slow bass sounds give it the correct atmosphere but it didn’t give a sense of originality.

There are a number of different symbols in the Mysteries of Egypt, all of them made to fit the theme. The low-paying symbols are a selection of hieroglyphs while the high-paying symbols are different characters in Egyptian history. I really liked how there were a lot of animations in the game, ranging from the wins being highlighted to different symbols having their own special animations.

The payouts of the different symbols are rather low but the combination of frequent wins means it results in a Medium Volatility. During my time playing, I didn’t find any of the features to result in especially big wins.

The features in Mysteries of Egypt are an integral part of the gameplay even though they don’t result in any major wins. Still, they appeared often enough to feel important for the outcome of many spins.

I found the wilds to appear quite frequently and across the screen. In fact, the more Wilds that appear on the screen, the higher any wins will be because of the increasing multiplier that will be applied. The way these work is:

While I played Mysteries of Egypt I found the game to frequently give 1 Wild but seeing more than that was rare and I don’t think I ever saw 3 Wilds on the screen at the same time.

The Free Spins mode was triggered by getting 3 Scatter Symbols on the screen. Once this happened the tiles would drop away to reveal a sarcophagus behind them before being replaced by the free spins screen.

During my time playing, I didn’t find the Free Spins mode to be especially lucrative. The Wilds that appeared weren’t sticky and there were frequent spins where nothing would happen. This often resulted in a disappointing coin win from this mode, making it less interesting to look out for.

Mysteries of Egypt is a very nice looking slot that is well designed and fun to play. The different features are a little sparse and simple. I do think it provides enough colour to this rather exhausting setting to give it some uniqueness.

The graphics are well made, and the added animations help bring things to life. The sound is good but rather boring. Players that enjoy something visual to entertain them while playing will be treated well. Those that only care about the gameplay might be a little disappointed.

I did find the game to be quite good at keeping my funds high and I even went above my starting coins for a long time. Players have the choice of choosing a bet between £0.10 and £50 which is an acceptable range. Unfortunately, the max. win is only 610x your bet which is very low compared to other slots with medium volatility.

Play Mysteries of Egypt for free

Browse casinos with Mysteries of Egypt and other slots from RedRake Gaming. Create an account and try the game for free before making a deposit.

You can play Mysteries of Egypt in English, Finnish, Swedish, German and 19 other languages. 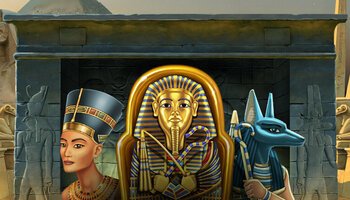