As wispy fog settles on a moonlit London street, Mysterious from Pragmatic Play gets ready to take you on an outing of sheer suspense, and hopefully delight.

Pragmatic Play is back at what they do best - creating highly thematic slots that transport players to another dimension. But, how does Mysterious fair? Will you feel an otherworldly tingle down the back of your spine or will you be so bored that you want to give up the ghost?

This is a (dead) honest review of Mysterious from Pragmatic Play, and here on Bojoko, we promise to deliver you candid criticism, for eternity.

While some players have been left hollow by this Victorian-themed title, others have revelled in the magic and mayhem of this 6x4 reel game with a maximum win potential of 9648x.

Haunting. Spooky. Ghostly. Otherworldly. If you enjoy a slot with spectacle, Mysterious ticks off all the aforementioned adjectives. An unearthly English capital is the backdrop to this slot from Pragmatic Play and if you’re seeking illusory delights spliced with deeply atmospheric music, you’ll no doubt welcome this game.

A Victorian/magical/historical/fantasy/mystery might seem like quite the niche mash-up for a slot, and, yes, this slot is a tad on the weak side when it comes to what it actually wants to deliver. Too many themes pulling against each other unfortunately creates a pretty insipid gaming dynamic and lessens the overall experience.

While stylistically, Mysterious may not completely deliver, there’s great attention to detail in character design. The ensemble of three spectral characters in the shape of The Lady, The Baron and The Lord are lovingly created and manage to ooze monochrome-magic and a not-too-spooky-but-spooky-enough mood. They kind of feel like something Walt Disney might scratch out if he was having a really bad day coupled with one of those end-of-the-world-type hangovers.

As this slot is based on the cobbled streets of London, it’s no surprise that the features here are also pretty pedestrian. They look like this:

Pragmatic Play won’t win any awards for originality but they also won’t deter players that like their slots to be interesting but not too interesting. Just like the flavour of your grandma’s apple pie, feature-wise, Mysterious is similarly comforting, although doesn’t necessarily challenge those gaming taste buds.

As slots develop with cutting-edge video graphics and animated sequences (such as pretty much anything NetEnt develop), Mysterious feels like it was created for a time that has long past and the lack of whistles and bells could indeed be deliberate, in an attempt to create a slot that portrays an old-worldly period, one of simplicity and elegance; refined and ethereal.

To unleash the Free Spins round, players must land three Free Spins anywhere on the grid, magically transforming the standard 4x4 reels to a poltergeist-pulverising 6x4, giving you more ways to win as you enjoy gratuitous spins. Feeling your spirit sag a little? Mysterious has foreseen this and you also have the opportunity for both autoplay and turbo play.

Based on features alone, this title isn’t really worth bringing out the ouija board for. But if you’re a player that likes your slots to have a more minimal approach to gameplay and yet still packs some high volatility action, this 96.5% RTP thriller will still make the hair on the back of your neck stand up.

The Crowns, Sovereigns and Sixpence

The Lady, The Baron and The Lord are the highest paying symbols and are, as ever, diluted with some royals. Other symbols include poster boys of the Victorian era and emerge through the dank dark in the forms of the bull, an owl, a lion and a ram.

To secure your place in the halls of purgatory while taking down some big wins, spin the Mysterious symbol with a chance to win 250x your bet when you land six game logo symbols.

Minimum bet starts at an affordable £0.10 and goes all the way up to £100, giving players a range to suit every budget. While Mysterious may not give you such massive win potential as slot catalogue companions such as Immortal Romance or Raging Rhino, it stands its corner as far as being a solid genre game.

Ghostly Goings-on but not Much Else

If you’re a player that values atmospheric gameplay and engaging bed music spliced neatly together with Disney-ish character design - if you’re more of an experience player - that values truly exquisite graphics and mood, then this is your ideal slot. It’s eye candy, sure, but it does it well.

Magic and spectacle aside, the real mystery is will this slot ever become popular? Due to the lack of features and general absence of game mechanic creativity, I for one will most probably ghost it.

Browse casinos with Mysterious™ and other slots from Pragmatic Play. Create an account and try the game for free before making a deposit.

You can play Mysterious™ in English, Finnish, Swedish, German and 19 other languages. 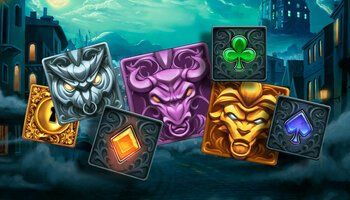