Mystery Planet sees us touchdown on a strange planet far from our own that is alien in every way. This planet does offer us some enticing reasons for us to be here: Cascading Reels, Multipliers and Free Spins to name but a few!

Released in 2015 by developer Evoplay Entertainment, Mystery Planet does a good job at setting the tone right from the start. We’re shown a wide-open view of this strange alien planet with a fantastic sky and another strange planet hovering above us. The 5-reel, 3-row playing field is made up out of different symbols that are related in some way to this strange planet.

Even the low-paying symbols that are standard card letters are made up to fit the setting, looking more like alien growth than what they actually are. There are 20 paylines to win with and coupled with some special features this results in a Low Volatility. There aren’t quite that many special animations for the different symbols but the cascading reels do happen through some interesting moves.

The sounds and music in Mystery Planet are somewhat like you’d expect from a slot set on an alien world: futuristic and mysterious. The music is very low-key and slow with mostly just the occasional piano chords. The reels spinning sounds like bubbles dropping down which did fit the visuals of all the symbols in different bubbles. The music picks up during the Free Spins mode but stays similarly mysterious and futuristic.

The symbols that are used in Mystery Planet are nicely designed but their age is starting to show, given their untextured feel. There are no real animations when there’s a win except for the bubbles of the win line lighting up and then the symbols disappearing, making room for new symbols.

The Scatter and Wild symbols are simply the words on the screen which might not be the prettiest solution but it does make things more obvious. Other slots sometimes use symbols that don’t show their special function at all, which makes it almost impossible to tell when a feature is about to be activated.

The symbols in Mystery Planet are:

Mystery Planet keeps its gameplay rather simple and obvious which I think a lot of players will enjoy. None of the features will be a true surprise for casual players but it does take the game away from the classic fruit machine gameplay some people might be looking for. The slot does fit the Evoplay library well, offering the same generic gameplay.

The game’s listed low volatility makes me think that the cascading reels feature is supposed to activate often and grant multiple wins in a row but in my experience, that hardly ever happened. I did not get multiple wins on a single spin at all and this also meant I didn’t get a multiplier applied to my wins either.

During my time playing, this resulted in a rather steady and harsh decline in funds over my time playing. Even the free spins mode, where the multiplier can go up to 15x your win, would often only award a small number of coins. This mode isn’t very difficult to activate, but it won’t be an automatic boost to your funds either.

Players can augment this slightly with bets between £0.10 and £300 per spin, although the max. win of 1,532x your bet is a little disappointing. I found it best to take a lot bet and see how the game plays, I tried it several times and noticed it can vary wildly how often the cascading reels help in creating multiple wins. Because of the multiplier feature, this will have a massive effect on the number of coins you’ll win.

Mystery Planet is suffering a little from its outdated graphics, looking rather bland and flat when compared to newer slots. Still, I commend the developers for trying to be original and adding some unique visuals to the slot.

Players who are familiar with the Evoplay games will not find a lot of variation here except for the Cascading Reels. The standard gameplay is solid but exactly the same as most other slots on the market. The extra features change up the experience a little bit without making it impossible to comprehend or create an entirely new element that players won’t adapt quickly.

Finally, I thought the rewards for winning weren’t quite high enough to fit the volatility. The game has a decent number of wins at any given moment but the cascading reels seem to be fitted to make the wins bigger and they almost never happened. Without Wilds dropping in the cascades there is little opportunity to get another win and increase the multiplier.

Browse casinos with Mystery Planet and other slots from Evoplay Entertainment. Create an account and try the game for free before making a deposit.

You can play Mystery Planet in English, Chinese 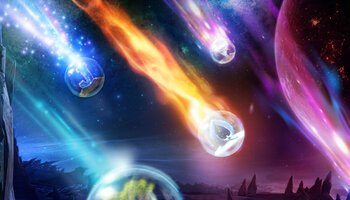