Mystic Hive is the slot that wants to bring the beehive into game form, giving players non-standard playing reels as well as paylines from both sides and free spins to make the hive come alive.

Experienced studio Betsoft released Mystic Hive in 2020, showing off their tendency to try out new things occasionally, and presenting this in a visually appealing way. The slot is built up out of a honeycomb that is between 3 and 5 tiles wide and 5 tiles high. Although the appearance and the name of the slot imply that bees are the main focus, this doesn’t come across in the design.

There are some animated bugs flying around the screen as you play but these distinctly do not look like bees but fireflies, who I don’t think build hives. Simultaneously, the symbols in the game are card letters and gems, which don’t feel like they are connected to the setting at all. Even though everything looks good, the disconnect between the expectations and the actual appearance makes it feel jarring.

Maybe the game is good for power players that enjoy something new and don’t mind how it looks. To accommodate players, you can pick a bet between £0.10 and £90 per spin. Wins are calculated through paylines with a total of 30 paylines on the screen.

As I mentioned before, Mystic Hive uses a collection of pretty-looking but disconnected symbols. They are lightly animated when part of a win and through the use of colours and unique shapes, they stay easily distinguishable. Nonetheless, it all feels thrown together without a lot of forethought. Due to the unique size of the playing field, the cluster pays mechanic and the number of symbols, the game is listed as High Volatility.

Games will receive wins regularly. In my experience, most spins will get you a win, but the low payouts for even the highest-paying symbol mean that you will require either a special feature to activate or to get a number of wins at the same time. This is where the high volatility comes from. There is no jackpot to speak of, with the highest win 243x your bet.

Mystic Hive makes use of its non-standard reels and a selection of random features to introduce a lot of randomness to the game. If you like this depends on the type of player you are. I found it to be rather confusing more than anything, but even so, the features tended to be quite beneficial. Especially the free spins mode will be a favourite amongst most players.

The fireflies are a random element of the game, able to appear at any time during the base game. There are 3 different coloured fireflies that each have a unique effect on the game.

As I said at the start, I don’t think fireflies make hives or honey so it is a weird association. The way they work also isn’t made clear by the gameplay itself and I had to look in the paytable to figure them out. Their impact is neglectful, only really helpful in triggering the free spins mode occasionally.

The Free Spins mode is a more interesting part of the game but it won’t create any huge wins either. Expect more of the same but with Sticky Wilds. Wins are not worth enough to really feel like the mode is worth activating.

Mystic Hive is a unique slot with a number of features that work together in different ways. I feel like the game made some very odd choices when it comes to its appearance, the use of symbols and the fireflies. It felt like the creators didn’t know that hives are associated with bees and that most of what they show here has nothing to do with bees.

When it comes to the gameplay, I thought it was acceptable. Even though there are a number of different features at play I didn’t think they were all that interesting. Out of the 3 types of fireflies, only 2 actually impacted the game. Out of those 2, only the one that activated the Free Spins mode helped get any wins.

It’s a nice game for people that want something new but aren’t looking to relearn how slots work. Instead, this game lets you jump right in if you’re alright with occasionally triggering things without understanding how or why.

Browse casinos with Mystic Hive and other slots from Betsoft. Create an account and try the game for free before making a deposit.

You can play Mystic Hive in English, Finnish, Swedish, German and 22 other languages. 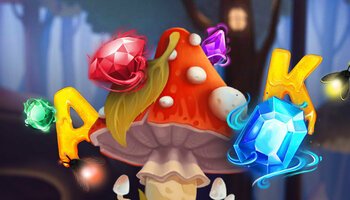