You can be in the company of fierce warriors and cyclop ogres and still make it out alive from the ancient land of Myth.

This is a game that I can enjoy playing because of the setting, despite the fact that the graphics hadn't aged all too well. But because it is a Play'n GO game from the period when they used to equip their productions with a gamble feature and 5000-coin symbols, playing a few dozen rounds on it may not be such a bad idea.

Myth takes players to ancient Athens whose folk entertained themselves and one another with superstitions and wild myths about almighty gods and villainous creatures. So, if defeating a harpy in a melee is something that you fancy doing in your lifetime, Myth is the game that makes it possible.

Play'n GO makes this outcome possible on three rows, five reels and 20 selectable paylines, which I find to be a perfect setting for a fun-loving adventure with the mythical creatures.

Those who will succeed at defeating a big pile of beasts can make it out alive with prizes that can amount to more than 3000x your bet.

As I said, the symbols hadn't aged too well but that can be overlooked in view of the gameplay, which can get quite exciting.

There are two sets of symbols - the low-paying category consists of royal cards and the good pays can crop up with the help of creatures such as the minotaur, Cerberus, the medusa, an ogre and a harpy.

Thankfully, the not-so-impressive picture symbols can spring to life when they become part of a winning outcome. The harpy flaps its wings, the medusa casts her stony gaze and the warrior puts up his shield. This does enough so as not to make Myth everything but exciting.

Another quality that helps the game hold one's attention is the music and the selection of sounds. Play'n GO has combined epic background music, heavy metal riffs and growls with the clanking of golden coins in the event a sizeable win crops up.

Myth comes with the kind of extra features that are part and parcel to most online slots. You can whack a monster and make it march on a winning payline with the help of the wild symbol, which is represented by the warrior and his golden shield. This mighty entity doubles all winning outcomes that'd been made with its help and are also the most valuable symbol on Myth's paytable, as it can pay 5000x your coin value for five of a kind.

The selectable paylines make it possible to play Myth with a single payline and a penny per spin, but I don't think it is worth it. Having all paylines active removes the possibility of missing out on a winning outcome.

The smallest bet when playing on all 20 paylines is 20p per spin and the biggest bet is 10.00 when your coin value is 10p and the setting for the number of coins is 5. This makes Myth not a particularly expensive game to play considering the number of high-paying symbols and their value.

Winning outcomes with five matching picture symbols pay between 12.5x and 37.5 your bet. On the other hand, the royal cards pay between 5x and 7.5x for the same number of matching symbols, which I think is more than decent.

I made sure to keep all payouts that were brought on by high-paying symbols so that I can gamble the winnings consisting of three royal cards.

This made my gaming experience more entertaining because the values of the cards are low enough (0.25x to 0.5x) to make them count for much. But two or three good guesses and the payout gets doubled for each hand.

Myth may not be the most appealing game in terms of graphic design, but I like the theme and especially the 3x payouts during the bonus feature. Would I recommend the game to the general slots-playing public? I'd say why not.

In my opinion, the math model is just right for players who don't mind getting smaller payouts and at more frequent rates than what is usual. All of the medium grades are because the game is dated, but my overall experience has been positive, to say the least.

Browse casinos with Myth and other slots from Play'n GO. Create an account and try the game for free before making a deposit.

You can play Myth in English, Finnish, Swedish, German and 30 other languages. 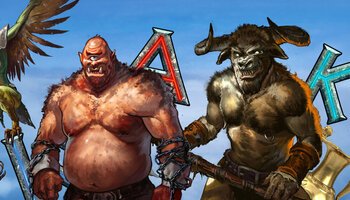