Mythic Maiden brings us into the abandoned attic of a decrepit house where we’re confronted with a traveller’s findings of their trip to the underworld. Hopefully, they brought something worth having!

This slot is one of the darker slots I’ve seen made by developer NetEnt, with its focus on rather gruesome imagery and an uncomfortable vibe. Where most of their slots settle themselves in cute or benign atmospheres, Mythic Maiden decided to go all out. I’d almost call it a Halloween slot, even though its setting is not related to that holiday.

Mythic Maiden was originally released in 2011 which makes it quite a senior slot by now. Even though some of the animations come across as outdated I think there are plenty of effects that keep the game up to date. With a 5-row, 3-reel playing field and 30 paylines it sticks close to the norm.

Since NetEnt doesn’t have a lot of scary slots, the closest resembling slot that I can remember is The Dark Joker Rizes by Yggdrasil. Even though that game isn’t quite as gruesome, it does have a similar creepy atmosphere that some players might enjoy.

I thought the game was nice to look at. The symbols are all hand-drawn and in the style of the theme. They all have small, simple animations that liven up the reels a bit, something that a lot of newer slots don’t have.

The music is what I’d expect. A mix of sound effects like the wind howling outside and a kind of adaptation of classic horror movie music. It wasn’t that much but it was enough to get me in the mood, and I liked that there was a continuous storm sound effect to keep it grounded.

The symbols in Mythic Maiden are all in the style of a scary horror attic, although the lower-paying symbols are still based on the usual Ace, King, etc. I always think that’s a bit of a shame but I suppose NetEnt doesn’t want to create completely new symbols across the board for every slot. Although, coming up with fun and creepy souvenirs from the underworld shouldn’t be too hard.

As I mentioned before, all the symbols have small animations when they’re on a winning payline. Things like the Tarantula wiggling its legs or the full moon showing a skull. I particularly liked how all the card-symbols were shaped candles and they’d lit up when they formed part of a win.

Mythic Maiden is pretty close to a classic slot, with only a few pretty basic features. This is compared to other NetEnt slots a step back although not necessarily a bad thing. In my experience they have a tendency to overflow their games with features, making them almost unwieldy to play.

When it comes to the features I’m afraid the Free Spins mode was extremely hard to get into. I played the game for a significant amount of time and only managed to hit it twice.

Once I did manage to get it though, it proved to be pretty lucrative. It is essentially the base game except with the added benefit of the Iron Maiden opening up and granting additional bonuses. These don’t appear on every spin but they can include multipliers and extra free spins.

The only other feature present in the game is the Wild mechanic, but since that’s such a staple for most slots I hardly know if it’s a feature anymore and not something that’s just part of video slots in the modern age like Autoplay and Quick Spin.

Mythic Maiden is getting old and it’s starting to show. The game still looks sufficiently creepy and it managed to catch the atmosphere well. At the same time, the animations are very basic and there are only a handful of features.

The game’s listed Low Volatility didn’t really fit my experience, with sizeable chunks of playing time without a single win. Obviously, your mileage may vary but I’ve become weary of NetEnt’s listed Volatility and usually assume they’ve been a little flexible with what they classify as low. I think it might also explain why a game that’s supposed to regularly grant you small wins has a max. win of a whopping 60,000x your bet! With the ability to choose a bet between £0.30 and £150 per spin that can be quite a prize.

I wish NetEnt or other developers would take a concept such as Mythic Maiden and update it to the modern age, updating the graphics and adding some more engaging features. I’m sure there are players like me who enjoy something a bit more creepy and horror-focused.

All in all, I enjoyed Mythic Maiden well enough but I wouldn’t say it’s going to be one that earned its place in the history books. It’s a little too simple for that, even though the setting does a lot to make up for it.

Browse casinos with Mythic Maiden and other slots from NetEnt. Create an account and try the game for free before making a deposit.

You can play Mythic Maiden in English, Finnish, Swedish, German and 20 other languages. 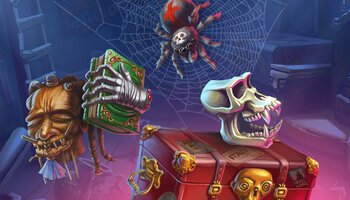