Naughty Girls Cabaret takes the popular risque entertainment for adults that were all the rage in the 19th century and turns it into an equally daring slot! This game features beautiful ladies as well as Stacked Wilds, a Bonus Game and Free Spins.

Developer Evoplay Entertainment was evidently feeling quite frisky in 2015 when they released this slot considering the topic as well as the visuals. That’s not to say it looks bad, in fact, it still looks very good considering its age. The symbols are all uniquely designed to fit the theme, even the card letters. The different girls have their own style and character while the background shows us Paris at the turn of the last century.

As far as the design goes, everything looks fittingly sultry and provocative without becoming tacky. A lot of the symbols are given a skin tone to imply things without actually showing anything, much like the actual cabaret. Some of the designs are a little riskier but never without going too far in my opinion. The 5-reel, 3-row playing field is big enough to give the symbols some room without it being bland.

When one of the 20 paylines is hit the game plays a bombastic trumpet solo while during the reels spinning you’ll hear a piano play in anticipation. It all fits the setting well. I also liked the different sound-effects, like people whistling from the invisible audience.

Naughty Girls Cabaret has taken its inspiration from the cabaret and it is evident in the symbols more than anything. There are different girls that appear as high-paying symbols while the Stacked Wild shows a contour of a woman. Meanwhile, the low-paying symbols are card letters dressed up as cabaret girls.

There aren’t a lot of animations to look at, with winning symbols just moving slightly and being highlighted. The style of everything is kept rather cartoony instead of going for an ultra-realistic style which I think was a good choice.

The symbols in this game are:

The payouts vary wildly with the high-paying symbols being very lucrative as they get longer while the card letters stay low even with five-of-a-kind on a bet line. The game does have a Medium Volatility which means players can expect a rather steady but spaced out number of wins.

Naughty Girls Cabaret has quite a few features that vary up the base gameplay as well as taking the player to a different bonus game. The features themselves aren’t unique but as always it’s the combinations that determine if they’re worth your time.

The main game feels like a traditional slot with only the occasional Stacked Wild really offering any variety when it comes to the gameplay. These appeared often enough to feel like a part of the game but the added feature of re-spins didn’t happen for me at all. It was only when I read the paytable that the game told me that both Stacked Wilds at the same time would trigger that feature.

Getting into the Bonus Game was a lot easier, with subsequent spins sometimes trigger it multiple times in a row. Even though the total possible coin win from this bonus game isn’t very high, even with a 3x multiplier, it still offers players a nice quick win of several spins. I found that it was partially the reason why my funds tended to go up almost the entire time, given a long enough playtime.

The other reason was the free spins mode. Again, this wasn’t because the coin wins were that large but mostly because it triggered rather frequently. Players receive 20 free spins with the possibility to re-trigger additional spins. After these are finished the player can pick from 1 of 3 cards for an extra bonus. This can be a 2x or 3x multiplier, or another 20 free spins. Regardless, players won’t get to pick another time.

I found the features to be a big part of the game and also offer some additional excitement while playing. There are enough things to do and say at all times. I liked the way they helped in granting coin wins as well.

Naughty Girls Cabaret is perhaps the most daring slot I’ve played in quite some time while still staying on the right side of good taste. In that aspect, it really encapsulates the setting it is based on. The art still looks great even considering its age and compared to other slots that are now a few years old. In general, hand-drawn slots tend to look modern for longer than those with 3D graphics.

There are still some animations, with the characters having some subtle but original movements while the card letters do a simple bounce. There is, unfortunately, nothing to be seen in the background which I thought was a missed detail.

Players that want to give it a try can pick a bet between £0.10 and £300 per spin which is a bit of a risk considering the volatility. The game offers a max. win of 2,333x your bet. It’s not very high compared to other developers but for an Evoplay game, it’s in the higher range.

Browse casinos with Naughty Girls Cabaret and other slots from Evoplay Entertainment. Create an account and try the game for free before making a deposit.

You can play Naughty Girls Cabaret in English, Chinese 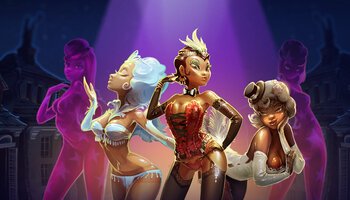