Nefertiti’s Riches is set in Ancient Egypt where the famous Queen rules her country with a steady hand. The slot does not only bring this classic empire to life but also allows players to enjoy a non-standard playing field, cascading reels and free spins.

Even though the game came out in 2021 the graphics look slightly outdated, even though the massive 6-reel, 10-row playing field leaves very little room for the separate tiles to show themselves off. The game’s background shows us a Sphinx statue along with the crumbling remains of what seems to be a temple, drawn by hand. Unfortunately, this art is mostly obscured by the playing field.

The game was developed by RedRake Gaming, who have a good number of years under their belt by now. The playing field is mostly filled with ‘empty’ symbols, grey depictions of the queen that have no value and do not contribute to any wins. The other symbols are balanced out between card letters and items you would find in Ancient Egypt. When there’s a win, the winning tiles are lit up before exploding and letting new symbols drop down.

It’s unfortunate that the playing field takes up so much space as the symbols are uncomfortably small. Even when trying to get a closer look, it’s almost impossible to make out any meaningful details. The card letters are only associated with the theme by a random hieroglyph stuck to it, while the different symbols are rather generic chairs, necklaces and urns.

Nefertiti’s Riches has a massive playing field and as a result uses the consecutive reels mechanic, meaning that a symbol has to appear on consecutive reels from left to right in order for it to count as a win. While other slots like this prefer the cluster pays mechanic, this one doesn’t have that. As a result, there are over 1 million paylines that the player could theoretically get a win on.

Even though there is a massive number of paylines, the slot is mostly filled with grey symbols that add nothing to the game. These make it a lot harder to get a win and as a result, the game has Medium Volatility. Getting a payout is reasonably easy and I had wins about half of the time, but these wins were usually too small to pay back for more than a handful of spins at a time.

Players can choose to change their bet somewhat in order to better deal with the volatility. It’s obviously also possible to increase them, in order to be awarded bigger wins. The possibility for this ranges from £0.20 to £20 per spin. If we look at the maximum size of a win, we get to an impressive 10,000x your bet. Obviously, this is not a number many players will hit and should be seen as the absolute best that’s possible and not something that is likely to occur.

The symbols in the slot include:

Nefertiti’s Riches doesn’t just depart from the standard gameplay through the size of the playing field. It also makes use of some features that change up the way a lot of the elements function. To start with, a quick look at the features themselves:

Most of the gameplay elements that show up here are probably familiar to players but they are implemented in slightly different ways. Free spins only activate whenever the player has 5 or more wins in a single spin, which prove to be extremely difficult for me. During my time playing, I never got more than 3. As a result, I didn’t get to see the free spins mode at all.

The special bonus game is easier to trigger but will require an extremely long time of playing. Every time a spin doesn’t grant any wins, the grey Nefertiti symbols on the screen are added to a tracker on the side. Once that tracker is filled, the bonus game starts and gives the player the opportunity to win some coins. After playing for an hour, my metre was only half full.

Nefertiti’s Riches is a slot that uses a very popular setting to mixed results. The tiles are too small to really get an idea of what they’re showing, and the background is largely obscured. As a result, it was difficult to feel immersed in the game.

The gameplay is solid if somewhat messy. Players that enjoy the more modern gameplay that some slots offer will likely be able to figure out the game pretty quickly. If you’re more of a classic slot fan you might want to give this a pass.

The features are interesting on paper but were extremely difficult to trigger in my experience, and as a result, I barely had an opportunity at checking them out. Players should prepare themselves for an extremely long time playing this game to get anything out of it, as it is clearly intended to be played for several hours in a row. This is not a slot to quickly play during commercials.

Browse casinos with Nefertiti's Riches and other slots from RedRake Gaming. Create an account and try the game for free before making a deposit.

You can play Nefertiti's Riches in English, Finnish, Swedish, German and 18 other languages. 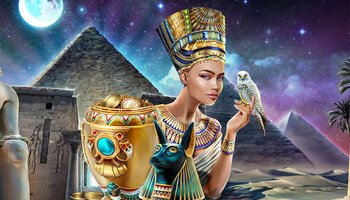