Building towers consisting of matching symbols can prove to be a lucrative occupation in Neon Staxx, a NetEnt game that has a payout potential of up to 4,000x your bet.

Every once in a while I come across a new neon-doused slot with a retro sci-fi theme that I simply can’t avoid comparing to NetEnt’s Neon Staxx. To me, this game is a point of reference for having all of the visual characteristics that define the genre.

In terms of gameplay and features, there is the defining feature called ‘Super Staxx’ that dictates an engaging tempo by canvassing multiple reels in a matching symbol kind.The reel set has a layout of 4x5 and enough paylines (40) to cover more than a few payline wins that can emerge from the same spin.

NetEnt could have left the game with that feature only, and all would have been fine, but they had also included another set of features to make for a gaming experience that I find dynamic and visually entertaining.

Anyone who is familiar with the movie Tron and its ‘Legacy’ sequel will find the originating idea for this game and those similar to it. As I am playing Neon Staxx, I can’t shake off the impression that I am in a highly-evolved, yet somehow still dystopian, platform city that NetEnt has built for this memorable game.

Let your imagination go wild and you may freely pick out a premise in which competing factions have taken to identifying themselves according to one of four animal symbols: viper, hawk, bear and lion. Regardless of the side that chooses you by granting bigger blocks consisting of stacked reels, we are all jamming to a Daft Punk-ish electronic ballad that has the 80s in its blood.

While the choice of music is spot on, the animal emblems are inanimate, even when they are part of a winning payline. I don’t think this takes away from the visual experience immensely, but it could have made the game engaging on yet another level.

The slots experts at NetEnt have fused together the extra features and special symbols perfectly within the gameplay. Yes, the Super Staxx feature defines the game and makes for better payouts, but it can reflect even better when a full or partial stack of wilds finds itself in the right position.

According to NetEnt, the maximum payout potential is 80,000 coins, which translates into wins of up to 4,000x your bet. This is a hefty amount, but also one that the majority of players probably aren't going to arrive at, due to the game's low to medium variance.

The low-paying symbols are a case in point for the paytable's low payouts when they trigger outside the Super Staxx feature. The royal card symbols pay only 0.2x and 0.25x for three of a kind and 1x and 1.25x your bet for five of a kind.

In the high-paying symbol category, you can gain your bet amount back starting with four bear symbols. This is the third most valuable symbol in this category, which illustrates that the potential payouts in Neon Staxx would amount to little without the Super Staxx feature.

Even though payline win amounts on the paytable are low, they may not necessarily reflect as such in the game. NetEnt has struck a perfect balance in this game. I think what makes the game appealing, besides the Super Staxx feature, are the 40 paylines, as this ensures that no winning outcome escapes the dragnet in the case of multiple symbol stacks or, in the best possible outcome, two or more stacks of wilds.

Browse casinos with Neon Staxx and other slots from NetEnt. Create an account and try the game for free before making a deposit.

You can play Neon Staxx in English, Finnish, Swedish, German and 20 other languages. 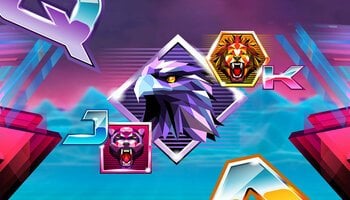