NFT Megaways jumps onto the recent craze of people buying these special nuggets of popular culture, a new way to monetize how we perceive our current society. This slot uses all this inspiration to create a highly artistic slot with Megaways, free spins and multipliers.

This game was released by Red Tiger in 2021, which showed some amazing foresight since the NFT-craze is relatively new. For those that don’t know, NFT stands for Non-Fundable Token and can pretty much represent anything. They are traditionally digital representations of something, often those things being digital as well. Think of an NFT as a unique collector’s item for things that don’t exist in the real world. That’s not to say an NFT can’t be based on something real, like a video of a famous sports match.

The developers tried to take such an abstract and a rather difficult topic and put it into a slot, and I found they did quite a good job. The first thing people will notice is the 8-bit aesthetic which does clutter the screen quite quickly. Meanwhile, the different symbols are based on different NFT’s or the cryptocurrency that is often used to pay for these things.

The game takes place on a screen with 6 reels while the Megaways feature changes the number of rows of each reel per spin. Any reel can have between 2 and 7 rows, randomly changing with every spin. This gives it between 324 and 200,704 possible paylines. The game also has a smaller row at the top of the screen which adds tiles to rows 2 through 5.

NFT Megaways is based around the idea of NFT’s and to represent this, the slot makes heavy use of these types of assets. Players will see familiar images like the Twitter bird, Doge and the Mona Lisa with sunglasses. Other symbols are represented with different cryptocurrencies, diamonds and various items. All of this is shown in the same 8-bit graphical style. Although it looks quite cluttered, I thought the use of colours and shapes helps keep it easy on the eyes.

Players will have to deal with High Volatility when playing the game, the listed RTP of 96% is quite sharp in comparison. In my experience, the game does tend to keep players from winning it big until they activate the free spins mode. This is where the game really shines. I’ll get back to that in a little bit.

If you want you can change your bets. The game lets you pick a bet between £0.10 and £10 per spin. This is a good idea if you either want bigger wins or you want your funds to last a little longer. I found the game to be quite good at granting some big wins now and then, even making back my spending up to that point. However, your mileage may vary so never expect a big payoff.

NFT Megaways keeps things relatively simple when it comes to the features but that doesn’t mean these features don’t have a big impact. I found them to be very enjoyable and often help create big wins.

The features found in this game include:

Most of the mechanics will likely already be familiar to players. The biggest change to the format are the multiplier wilds. These only appear on the 4-reel row at the top of the screen but help create paylines as normal. If the payline includes any low-paying symbols, these will be added to the wild and increase its multiplier up to a maximum of 30x your win.

Then, the symbols will cascade and the multiplier is applied to any new wins that are created. During the free spins mode, the multiplier won’t reset between spins. In my experience, it would often make the wins during this bonus game very large. It’s also quite possible for additional Scatter symbols to appear on the screen, adding extra free spins.

NFT Megaways is something of a strange slot, especially if you’ve never heard of NFT’s before. The way the developers decided to visualize it does help a little bit. Even if you don’t understand NFT’s at all, the game still plays very well. The only thing I wasn’t happy with was the music, which is loud and very jarring.

The features are always active, both during the base game and the free spins mode. This makes it possible to get big wins during the normal gameplay even though it’s less likely. Triggering the free spins isn’t as hard as with some other games, but it might still take a while.

I would recommend this slot to both casual players and power players. The possibility of getting big wins is definitely there, and even without those, the game is very enjoyable. With the Megaways functionality, every spin is different, and the multiplier wilds can turn a regular win into a huge payoff. No wonder the game has an impressive max. win of 10,000x your bet.

Browse casinos with NFT Megaways™ and other slots from Red Tiger. Create an account and try the game for free before making a deposit.

You can play NFT Megaways™ in English, Finnish, Swedish, German and 18 other languages. 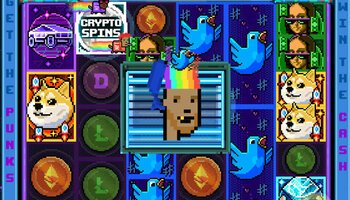