Charge up the coils, turn the switch and let the current flow. Meet Nikola Tesla for a delightfully shocking experiment.

Nikola Tesla was one of the greatest inventors of all time and he is known as the father of modern electricity. His work on direct current, electrostatic induction and electric coils were beyond anything at the time. We are still figuring out his inventions to this day.

Many of Tesla’s inventions were groundbreaking, but some haven’t been understood. This created a mystical side to Tesla, which led to many stories about his machines. Nikola Tesla’s Incredible Machine is one of them. Join Tesla and figure out what this machine is made for.

Nikola Tesla’s Incredible Machine was released in the autumn of 2019. It was made by Rabcat in conjunction with Yggdrasil. The game is a five-reel slot with 25 fixed paylines, medium volatility and a 96.2% RTP.

Nikola Tesla’s Incredible machine is a blend of Art Deco and with some mad scientist sprinkled in there. The huge coils, the giant cogwheels and the glass dome above, all paint a picture of a scientist on a brink of either a great invention or madness.

The visuals are all done well and everything is beautiful. This kind of theme is not a unique idea though, and we have seen many steampunk inventors, scientists and lightning-powered contraptions, for example in NetEnt’s Steam Power. I do like these ideas and themes, but it’s nothing new.

The soundscape is more atmospheric than actual music. The slow tunes fit the style and you get a nice Dr. Frankenstein feel about it. The music gets electrified when the bonus features activate, but it still isn’t anything you would remember. Good, but not remarkable.

If you know your slots, then you can immediately spot that this game is not done by Yggdrasil alone. The look and the interface are clearly Rabcat’s handiwork, which is not a negative thing. It is just something that pops up if you know about the game developers.

The symbols feature a metal structure and enclosed within are beautifully typed letters under a glass window. There are also the tools of the trade as the high-paying symbols, a capacitor, a pair of goggles and a stopwatch. Tesla himself shows up as a wild and the Free Spins sign is the fairly obvious free spin symbol.

All the symbols have fairly balanced wins and during the main game, you can get a decent hit every once in a while. I feel that sometimes those wins are too far apart, and most of the time I just spun my wheels and got nowhere.

The special features obviously have the best wins. The Energy Burst feature activates often enough, so it doesn’t feel like a tease. The free spins are a bit harder to hit but are definitely worth it. Free Spin feature can be activated with at least three free spin symbols. They are scatter symbols, so they can show up anywhere on the reels.

Activating the Free Spin feature is simple, just get three or more free spin scatter symbols on the reels. You get either 8, 10 or 12 free spins depending on how many scatters you get.

The middle reel is an important one because it is hooked up to the coils on the top and on the bottom of the machine. If the three symbols match on the middle reel, the energy can travel freely and the machine is all charged up.

Hitting an energy burst will give you either three or five free spins, depending on the symbol. During those spins, one of the Energy Burst features below is chosen at random.

The first Energy Burst is the Exploding Wild feature. At the start of the spins, you will get two or three wild symbols that are locked in place. These sticky wilds will stay in their place for the duration of the spins.

The second Energy Burst is the Wild Substitution. Now the game randomly chooses one symbol, that will become a wild. Every time the chosen symbol appears on the reels, it will be changed into a wild.

The third Energy Burst is the Reel Clone feature. At the beginning of the spins, the game randomly selects three cloned reels from three possible options. You can get reels 1-2-4, reels 1-3-4 or reels 2-3-4. The chosen reels are clones of each other and will always have the exact same three symbols visible.

Nikola Tesla’s Incredible machine is a good slot. I wouldn’t call it incredible, but it is good. I find the biggest problem for me is that it isn’t innovative. You made a game about an inventor, so it would be appropriate to invent some new mechanics. Now you just took what has already been made and put it all together in this one slot. That sounds more like an Edison move.

Now, don’t get me wrong here. Nikola Tesla’s Incredible Machine is definitely worth a try. It might not blow your socks off, but it’s a solid game. For me, this goes to the pile of good games. I might not choose it as the first game I want to play, but if it is there, I will play it.

It is hard to say what exactly needs to change to make this a great game. Everything is done well, but just not perfectly.

Browse casinos with Nikola Tesla's Incredible Machine and other slots from Yggdrasil. Create an account and try the game for free before making a deposit.

You can play Nikola Tesla's Incredible Machine in English, Finnish, Swedish, German and 18 other languages. 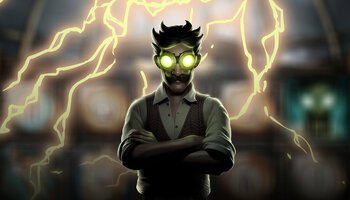