Ninja Ways takes the ancient Japanese tradition of the assassin as a basis for a midnight-blue slot with its fair share of features, set in a dark street of rural Japan.

Developed by Red Tiger and released in 2018, this is another slot in the Ways series. The original being Divine Ways which was released by the same developer in 2016. Again, the slot takes an Asian setting and integrates it into an action-packed slot with some very interesting features and some beautiful animations.

The game boasts a 6-reel, 4-row playing field with a massive 4,096 ways to win. This gives players the opportunity to get a win whenever a symbol appears on consecutive reels. Unfortunately, this also means that the payout per payline is very low. It results in a High Volatility as well, giving players only the occasional big payout and very little in between.

The graphics for Ninja Ways definitely stand out when compared to other slots by Red Tiger. The main attraction is the ninja character who not only appears on big win screens but also injects random symbols onto the playing field at random intervals. The rest of the game is also made to fit the theme, with the background showing a random street filled with classical Japanese buildings.

I found the music to be a little derivative considering the theme with its standard Japanese tunes. It did have a high quality and it did not harm the theme, it was just lacking in originality. Meanwhile, the sound-effects are toned down enough not to become jarring.

The symbols in Ninja Ways are all drawn to fit the theme of the slot, even though the low-paying symbols are based on cards as usual. I found that to detract from the setting but the art was at least consistent with the rest of the game so they didn’t bother me too much. I did consider it a missed opportunity nonetheless.

Because of the high number of paylines, the coin value of any win is very low, even with six-of-a-kind. That’s due to the fact that statistically, you should be getting more than one winning payline per spin. In my experience, it wasn’t that positive and I’d spend quite some time in-between wins. As a result, even if I picked a lower bet between £0.10 and £10 per spin I would still steadily lose coins.

The features in Ninja Ways are pretty interesting even though they aren’t particularly original. Because of the much larger playing field, the features do get some extra dimensions.

The 4,096 ways to win were always activated and would sometimes account for a win but not all the time and often not enough to make back the coins I spent on making the spin. This was especially frustrating if there had been a few spins already, making it feel like a real drain.

During my time playing I never really had the idea that I was making any substantial enough wins to account for the coins I had spent. The free spins mode triggered regularly, making it feel like part of the game but also not a guarantee for any big wins. The special features had to align in a certain way for it to result in a win that was substantial enough to make back the coins I had spent up to that point.

All in all, the features were impressive to look at but felt underrepresented to the point of being almost irrelevant. The game is very good at appealing to the visual part of my brain but left me feeling unfulfilled when playing it.

Ninja Ways is a slot with a lot of flash, but not a lot of substance. The features are impressive on paper but didn’t really show up often enough for me to feel like they were making a big impact. The fact that most of the features were extremely rare even during the Free Spins mode made it feel like they were only a part of the game in name only.

The high volatility feels like it’s been taken to the extreme in this game, meaning the player will often walk away with nothing and only very rarely get a massive win that compensates a lot of their losses. However, that makes it very uncertain the player sticks around long enough to see this massive win at all. Likely, most players will have quit before then.

If you’re a fan of very nicely designed slots with a ton of animations and a distinctly Japanese style, and you just enjoy spinning reels without worrying too much about winning or losing, Ninja Ways will have something to offer you. If you are the type of player that prefers to maximize their odds, then it’s probably best to keep looking.

Browse casinos with Ninja Ways and other slots from Red Tiger. Create an account and try the game for free before making a deposit.

You can play Ninja Ways in English, Finnish, Swedish, German and 18 other languages. 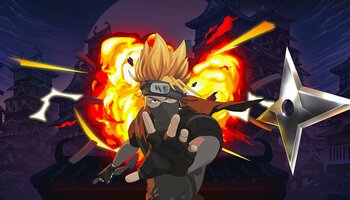