Nitro Circus is a game based on the very popular stunt show by the same name, created to wow people as stunt drivers use motorcycles, bicycles and more bizarre vehicles to make crazy jumps!

Created by Yggdrasil and released in 2018, this licensed game attempts to bring the craziness of the Nitro Circus cast to the screen. Players are encouraged to watch these daredevils break records and not too many bones on the 5-reel, 4-row playing field. With a satisfactory 25 paylines, we get to feel the thrill of stunt jumping too.

As always, the game looks great. It uses the faces of several of the big names in Nitro Circus as high-paying symbols while the low-paying symbols are different kinds of helmets. The background shows a crowded stadium and when there’s a win there are flames shooting out and stuntmen making jumps across the screen!

The bonus game deserves special mention as we watch one of the stuntmen drive across the screen, making big jumps to score different bonuses before finishing with a massive multiplier.

The soundtrack fits the game like a glove with a hard-rocking song playing in the background while we hear all sorts of engines running. Wins play a fitting riff with the audience cheering. Getting into the bonus game brings the energy up to 11 with the song kicking up a notch.

All the symbols in the game are made exclusively for Nitro Circus. The different characters we see are big names in the Nitro Circus family and are animated when part of a win. Meanwhile, the rest of the symbols are filled with the letters NITRO across the 5 reels and a collection of crash helmets.

I found the colour palette to be a little bland, causing some of the symbols to blend together a bit too much. Especially the different helmets would be rather difficult to differentiate as the reels spun, which made it trickier to quickly see wins. The game also doesn’t really emphasise wins all that clearly, which didn’t help.

Nitro Circus has quite an arrangement of features I’ll go over next:

Let’s go over the most unique features one by one.

With the letters NITRO spelt across all 5 reels, the Nitro Jump bonus game starts. Here, we see a stuntman racing across a ramp collecting different symbols. These symbols can include:

The bonus game is divided into 3 regular jumps and 1 final jump. During the regular jumps, the stuntman can hit 1 or more of the listed bonuses. After those 3 jumps, the final jump involves making speed and attempting to hit the highest multiplier. Depending on the number of speed boosts you collected, this can help in getting a higher multiplier.

There are multiple vehicles you can choose to run this course with. You start with 3 but there are 4 more you can unlock. Each has 3 statistics:

All of this melds together reasonably well. Even though there are a lot of moving parts that make up this feature, there is little you as a player get to do while it plays. The most important choices you make are picking which vehicle to stunt with and how fast you want to take the final jump: the faster you go, the bigger the chance at a high multiplier. Unfortunately, it’s also more likely you’ll fall and not get any multiplier!

I found the game to communicate the different features well. They are pretty original but the way it works is rather simple and there are frequent information screens that remind you of the different statistics and bonuses. In the end, the game largely plays itself and it's more a matter of watching the end result.

The Free Spins mode was rarer than the Bonus Game but it also provided some good value. The wins were pretty high in my experience. If you only get a single bomb on the screen, you see 5 random bonuses until there is only 1 left, which is the one you get.

Nitro Circus is an ambitious attempt by Yggdrasil to bring the stunt-crazy people of Nitro Circus to the slot circuit and I think they did a great job. From the opening cinematic with real footage to the animated backgrounds and the crazy bonus game, the entire slot is a celebration of stunts and jumps.

I wasn’t familiar with Nitro Circus before I played this slot but I looked them up afterwards and have enjoyed some of their shows on the internet ever since. The game brings to life the jovial absurdity that the real cast showcases and I appreciate that.

There are a lot of features in this game which is why I wouldn’t recommend this game to people that enjoy the real classic slot experience. Even though it uses a standard playing field with normal paylines, the bonus game does a lot of new things that classic gamers might not enjoy as much.

In contrast, I believe players that enjoy modern and inventive slots will get a big kick out of this game. If you don’t give this slot a try, you’re missing out! You can choose a bet between £0.10 and £125 to cater to your daredevil side. Unfortunately, a Medium Volatility with a max. win of 500x your bet might make it harder to get any big wins.

Browse casinos with Nitro Circus and other slots from Yggdrasil. Create an account and try the game for free before making a deposit.

You can play Nitro Circus in English, Finnish, Swedish, German and 18 other languages. 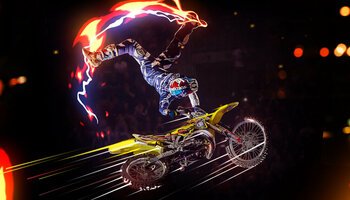