If someone wants to go street racing but can't muster the audacity to zip down the main drag at face-melting speed, then playing with toy cars may be the safest way to stardom. Maybe the designers at Tom Horn Gaming wanted to make an online slot about street racing, but the end result has come out as the dream playground of a five-year-old boy.

I was five and played with toy cars about a century ago but the game got the best of my curiosity nevertheless so I gave it a try. Reading the facts and figures about Nitro Madness helped in making the decision because of the maximum payout potential of 5,000x your bet and because the theoretical return to player is a wholesome 97%.

As I expected, I didn't find the game particularly engaging. I'd say it was quite on the contrary. Even though I liked some of Tom Horn's slots that have a similar quality in graphics, Nitro Madness underwhelms with its gameplay altogether. The game comes with two extra features but I only found one of these to be appealing and therefore worthy of a reason for giving the game a chance.

I was confused about whether Nitro Madness is indeed about car racing or if it is about toy race cars. The record is set straight by a single symbol on the paytable - the scatter, which shows a 2D rendition of a Race Girl in skimpy "clothes". Nevertheless, it was impossible to shake off the impression that the graphic design simply lacks quality and animation.

The only detail that can hold up a higher standard is the sound design. I have to hand it to Tom Horn, it has outdone itself in this regard because most of the previous releases had a substandard choice of sounds and/or musical theme. But the only way to enjoy the layered electronic beat and melody is by first turning off the game sounds from the Menu because spinning the reels also comes with an abrasive sound that drowns-out the audio track.

I guess Tom Horn's logic was this is a slot game about racing and when you turn on the nitro you wouldn't be able to hear a thing anyway. But that, of course, couldn't have been the case.

The extra features are really the only good reason why anyone should play this game. I'll get to the part about the paytable, but I'll just give you guys a heads-up way ahead, it underwhelms just like the graphics.

The funny thing about Nitro Madness is that despite the weak bonus feature and lack of free spins, the game has the smallest bet size of 2p per payline which extrapolates to 40p for the minimum bet. I don't find this to be the most friendly bet size for players who just want to try the game.

As for the potential payouts, as I said, the paytable structure doesn't offer a decent payout potential because the most valuable symbol, aside from the wild, can pay 25x your bet. Besides the cop car, the black, yellow and pink roadsters can pay 5x, 7.5x and 10x your total bet for five of a kind on a payline. All other symbol combinations for the high-paying symbols can pay between 0.1x and 5x.

There are car-racing slots that are far better than the game at hand, like the Macau Racing slot by Red Tiger Gaming with its sticky and expanding car symbols. But if I am looking for some kind of advantage in the Nitro Madness slot, it’s the payout consistency.

The game’s low variance and high RTP has reflected well in my experience. The payouts were just slightly lower or higher than the bet, but there were many medium-sized wins which had occurred with the regular appearance of the wild symbol.

Overall, it’s a decent game for the reasons above, but it is painstakingly uneventful and lacking the thrill that you’d normally get from a bonus feature.

Browse casinos with Nitro Madness and other slots from Tom Horn Gaming. Create an account and try the game for free before making a deposit.

You can play Nitro Madness in English, Finnish, Swedish, German and 22 other languages. 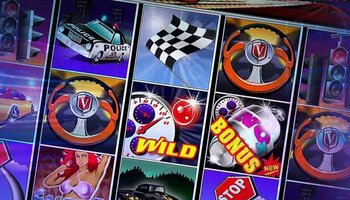