Northern Sky brings the rustic, quiet wilderness of the far north to our screen. Watch the sun barely making its way past the horizon as the reels are filled with crystalised animals in this game with sticky re-spins.

This Quickspin slot shows off the developer’s creative muscles with some amazing art-design as well as a fun combination of features. The game, released in 2018, is set somewhere in the North where we are overlooking a seemingly endless forest. Far in the distance a singular mountain stands. The game has a 5-reel, 3-row playing field with a paltry 9 betlines but this is compensated for by its sticky re-spins.

I was really impressed by the artistic style of this game, especially concerning the different symbols. These are mostly based on card suits and animals, but done in a style that makes it look like everything is cut out of gems. Using a combination of shapes, colours and shading make it look beautiful and way better than other slots with gems as a theme.

The symbols are unfortunately not animated at all, but due to the sticky re-spin function, they do frequently burst into shards to make room for new symbols. The Bonus symbols show a quick Aurora Borealis which looks beautiful but only takes a fraction of a second.

Northern Sky does not have a very large number of different symbols but in combination with the small number of winlines it still results in a High Volatility. Players will have to expect the sticky re-spins to do a lot of the heavy lifting when it comes to getting any big wins. Speaking of, the max. win of 3,111x your bet is actually quite commendable.

Players get to pick a bet between £0.10 and £100 while playing Northern Sky which lets them choose how risky they want to get. Considering its volatility I would suggest starting low and working your way up to get a feel for the rate of wins first. Nonetheless, I found the game to give me a good feeling of being able to win big.

The slot is rather light on features, but almost all of them appear frequently, making them an important part of Northern Sky.

It was very rare while I played, but it was possible for two different symbols to trigger a win on the same screen. When that happened, both symbols became sticky and additional tiles of either symbol could be added to the screen and triggered another re-spin. Because of the high volatility, I did not see it happen very often since only a single win is already rare.

During the base game, a Bonus symbol appears. When there is a win on the screen at the same time, this symbol is added to a tracker on the side of the playing field. Additional Bonus symbols are also added to this tracker as long as re-spins keep activating. Once a re-spin does not grant any extra wins the game returns to its normal spins and the Bonus symbols are discarded.

If a player gets a re-spin streak that lasts long enough for 3 Bonus Symbols to be added to the tracker, the Free Spins mode activates. At this point, the player receives 10 free spins. During the Free Spins mode, only high-paying symbols appear on the screen. In this game, these are the 4 animals. This makes it more likely for a win to occur and for a re-spin to add that specific symbol to the playing field.

While I was playing I found the Free Spins mode to activate semi-regularly and when it did it would often be of considerable value to my balance. The high volatility element of the slot definitely translates to being able to get into the free spins mode as often as possible.

All of this is explained intuitively during the gameplay, without requiring a player to dive into the paytable. Simply start spinning and the game makes everything clear!

I was really amazed by the look of Northern Sky. The symbols aren’t especially detailed but their style and implementation were a tremendous joy. There is a lack of animations but I don’t think they would have added anything. If anything, they would have made the crystal look seem worse.

The game has tight, quick gameplay that’s focused around sticky re-spins. This element of the game is done very well too. The symbols drop away quickly, the sticky symbols are marked with lit up rings and players get updated on the cumulative value of their wins with every re-spin. Finally, the tracker makes it clear how close you are to the Free Spins mode.

I would guess that almost any type of player can enjoy this slot. Classic players might have to get used to the sticky re-spins a little bit but it also adds a lot to the gameplay. Modern players will have a great time just watching this game play while the features give it an updated sense.

Browse casinos with Northern Sky and other slots from Quickspin. Create an account and try the game for free before making a deposit.

You can play Northern Sky in English, Finnish, Swedish, German and 23 other languages. 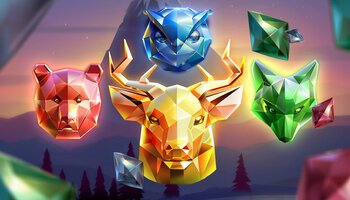