Welcome to the world of Chinese mythology. Join Nüwa as she rebuilds the sky from the five elements that make the world.

Habanero released Nuwa in the summer of 2019 to a somewhat uninterested crowd. The slot didn’t make any waves even though it is a nice slot. One thing that did catch people’s eyes is the massive RTP of 98%.

This has been a running issue with the developer Habanero for a long time. They are excellent at making nice games. But that’s just it, the slots are only nice. Their games have a tendency of being average or slightly above average, but none are great. I can’t think of a single great Habanero slot to save my life.

Nuwa fits that description well. The slot has some nice features, but for every good thing, there is another one that needs improving. The slot leans heavily on a couple of special features, but is that enough to make this slot worth your time?

Nuwa is a beautiful slot with a hand-drawn style and vibrant colours. The slot has an Asian theme, with matching music and visuals.

When I first opened the game up, I thought that this is a pretty game, but the theme felt kinda flat. The game won’t tell you any backstory or even give you a hint on what it is all about. Eventually, I got curious and started googling, and lo-and-behold, the game is heavily based on Chinese mythology. If you didn’t know that coming in, the game will not let you in on it one bit.

Nüwa is the mother goddess in Chinese folklore that created all the people and even restored the broken sky. The five elements she used are the stones you see in this slot. Fire, earth, wood, water and steel are the key to access the best feature of the game.

Even though the visuals are great, the sound is mediocre. The sound effects are bland and the music is fairly generic Chinese background stuff. The song is something you would hear in a Chinese restaurant.

The symbols of the slot match the theme well, but the game won’t bother to tell you that. You get four flowers native to China and five stones, which are the five elements that make up the world. There are also two special symbols to make things a bit more interesting.

The goddess Nüwa is the wild symbol and has a trick up her sleeve. She will expand to fill the entire reel if she is a part of a winning combination. The scatter symbol is a snake guarding a yellow gem and it can activate the Free Games feature. Get at least three snakes anywhere on the reels and you get 8 free spins and a cash prize.

The slot has high volatility and you can tell that right away. The pay structure is extremely top-heavy and to win anything, you need to get a minimum of four good symbols. And I do mean good symbols, as the worst symbol in the game won’t even give you your wager back if you get five of them.

The slot has a very high RTP of 98%, but the volatility makes it so that winning is difficult. You either make it big or watch your money disappear quickly. There just are not enough middle-tier prizes.

The goddess Nüwa is the wild symbol and will help you out a lot. Every time she is a part of a winning combination, her symbol first expands to fill the whole reel. Then the game checks which paylines have a win. The wild symbol only appears on the first and third reel. The slot rules mention this a bit strangely, as they first say that this rule is for the base game, and then they make a whole new note that this same rule is for the free spins.

If you get at least three scatter symbols, you win 8 free spins. Collecting more of them only gives you a larger cash prize. The Free Games feature doesn’t differ from the base game, but you can activate the Bonus Feature if you collect all five elements.

During the free spins, you start to collect the five elemental stones. If you get a winning combination with one, it is collected to the top of the screen. Get them all and you activate the Bonus Feature.

The Bonus Feature is another free spin game, where you get 5 spins with 2x multiplier. This mode is extremely hard to activate and barely even worth it.

Nuwa has a progressive jackpot, but this is no ordinary big win. This jackpot can’t be directly won from the game, but you can win it by not winning at all.

Jackpot Race is a feature that works in three steps. First, is the accumulation phase, in which the pot can only grow and it can’t be won. Second, is the race phase, where you get a five-minute timer and by the end of it, the jackpot will be won. The third phase is the payout phase, which starts at the moment the race is over and the jackpot will now be given to three lucky players. The person who placed a bet closest to the start of the payout phase wins 50% of the pot, the next player will get 35% and the third will get 15% of the money.

Nuwa is a perfect example of an okay game. This goes as far as to be almost annoyingly okay. There are so many things that are just fine, but nothing is great. The game won’t rub you the wrong way, but there’s not much to write home about.

For every good thing that this game has going for it, there is another that is a bit bland. Like that the theme is beautiful, but there the slot doesn’t tell you anything about the story, or that the Jackpot Race feature is interesting, but the bonus game is a letdown.

When I first looked into this slot, I really wanted to like it. But the further I got in the game, the less excited I got. What was good got overshadowed by what is mediocre. This slot is simply okay.

Browse casinos with Nuwa and other slots from Habanero. Create an account and try the game for free before making a deposit.

You can play Nuwa in English 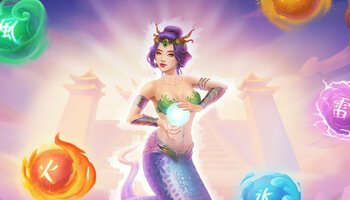