An ogre has conquered the kingdom and is terrorising its citizens. Wait for the veil of darkness to rack up some wins.

Betsoft’s 2018 slot Ogre Empire is a funny game with the characteristic CGI art style we have come to love. The five-reel slot is a medieval-themed game, more akin to Shrek than to Game of Thrones.

Ogre Empire is a game full of special features. When I started to play it, it took me a while to even go through the rules of the game. There are many features, that are surprisingly easy to understand.

This is a balanced game, with medium volatility. The risk isn’t big, but at the same time, the reward isn’t that high either. This is a great game if you just want to spend time playing, as it won’t drain your bankroll. I found myself playing it for ages, all because the game just constantly gave me back what I wagered.

Ogre Empire is a fine example of the Betsoft style. Large CGI characters, good use of colour and a lively atmosphere. Betsoft knows how to make a visually interesting game, that looks like it could have been pulled straight from an animated film.

First thing you see as the game loads up is the giant green ogre sitting on his throne made of houses. Not a very comfortable seat, but he makes due. This ogre is our main character; the despotic ruler of this land and the one who all the people fear.

The soundscape is on par with the visuals. The music you hear is fantasy-themed and game sounds fit the bill nicely. Nothing here is extraordinarily amazing, but also nothing stands out as bad. Everything just fits together.

There is something about the way Betsoft designs their games that I love. I enjoy animated films, traditional and modern, and these games remind me of them. In this case, the obvious connection is to Shrek. Even though this ogre doesn’t really look like Shrek, or that he is ten times taller than Shrek, I still made a positive connection in my head.

Ogre Empire is built around the theme and everything in it supports it. The clever use of the symbols and the art in them are all working together. They tell the story of a ruthless ogre ruler scaring the people.

The basic number symbols here are not just what they seem at first. They are actually windows, and when the night falls, the citizens will open them up and change the symbols. The high-valued picture symbols feature the ogre and the treasures he has gathered. There are also flowers, which act as the wild and a day/night symbol, which changes the time of day.

This is a medium volatility game, so the wins are very balanced. You can easily get back what you wagered, but hitting a big win is much harder. On a positive note, you can keep playing for a long time.

During the daytime, the best symbols are the ogre and his treasures. You can get up to 16x your wager if you get five large diamonds on a payline. After nightfall, the king will reward you 40x your bet and the jester can double that.

Your tactic should be to try to get combos during the day and hit high reward symbols during the night.

Ogre Empire is filled to the brim with special features, but don’t worry, they are easy to understand. Nothing here stands out as confusing or unintuitive.

Ogre Empire has two separate modes, night and day. Some of the features are active only at night and some during the day. If you get the full day change symbol on reel 3, the game will change the mode. Changing to daytime gives you a 4x win and changing to night is a 6x win.

Flowers are the wilds and they operate a bit differently depending on the time of the day. Flowers that blossom by day can spread to squares that are adjacent to the original flower. Night flowers spread to any square on any reel, and in both cases, up to three new flowers can bloom.

While the sun is up, our ogre is wide awake. Occasionally he gets tired of the reels spinning next to him and smashes them to pieces. Don’t worry, if the reels had any wins, you get to keep them and all the new wins that come from the falling symbols.

When the night falls, so does the eyelids of our ruthless emperor ogre. Now that it is safe to walk outside, the citizens pop out from behind their symbols. Kings and queens reward you with massive wins and the jester behind the A-symbol turns into a wild that doubles your wins.

Every time you get a regular win, you have the option to double it up. Just hit the Double Up button and you are ready to gamble. Choose to either bet everything or just half, and then pick heads or tails. You can continue to double up multiple times.

Ogre Empire is an interesting game. It is well done and a lot of effort is put into it. The graphical work is superb and the theme works. Simply put, this is a good slot.

What I found fascinating was the volatility. The risk/reward system here is somewhat funny, as I have been able to maintain a steady bankroll in it for a long time. After racking up something around a thousand spins, I had only lost about 20% of my initial money. Sure, I was in the red, but I got a lot out of it. A thousand spins take a while to go through.

One important thing I need to emphasise is the double up feature. If you want to just play for a long time to have fun or to kill time, then don’t use it. If you want to risk it all and go for broke, then hit that button like an ogre smashing up houses. Having this option is great. Everyone gets to play the way they want to.

Browse casinos with Ogre Empire and other slots from Betsoft. Create an account and try the game for free before making a deposit.

You can play Ogre Empire in English, Finnish, Swedish, German and 22 other languages. 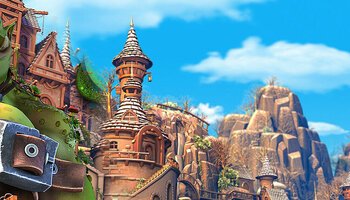